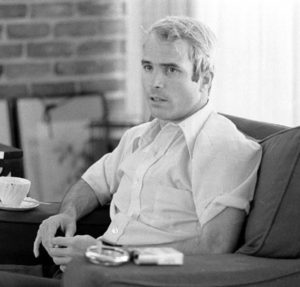 Photo of John McCain during an interview, April 24, 1974. Collection of the Library of Congress. Photographer: Thomas J. O’Halloran.

The National Newspaper Publishers Association (NNPA) extends sincerest condolences to the family of Senator John McCain. Dr. Benjamin F. Chavis Jr, President and CEO of the NNPA emphasized, “John McCain’s integrity and courage were his greatest virtues. His national leadership example is still needed today not only in the U.S. Senate, but also in every state, city and town across America.”

Dorothy Leavell, Chairman of the NNPA and publisher of the Crusader Newspapers, stated, “The death of Senator John McCain reminds us that none of us are immortal, but his life was one of service and love for his country. Giving of one’s service until the end speaks volumes of his integrity and he fulfilled the call from our maker to be of service to others.”

Cloves Campbell III, former Chairman of the NNPA and publisher of the Arizona Informant observed, “Senator John McCain will be remembered in the African American community of Arizona as a national statesman who grew and evolved particularly in his later years as an elected official who transcended partisan politics and who eventually did what he thought was the right thing to do rather than to be confined to political party loyalty. That is why he voted pivotally to save the Affordable Care Act (Obamacare) at a time when most Republicans were voting to end the ACA.”

“His acts of service in war, where he was held captive, and then at home, was one of dignity, respect and care in the United States Senate far surpassing many others in similar circumstances,” concluded Leavell. “Above all, he put partisanship aside to make decisions that were in the best interest of all of the citizens of the United States and usually without much fanfare. We shall remember him and miss his brand of high character in the Senate. We add our condolences to his family and our country as a whole. Rest in peace (RIP) dear Senator.”

Ben Wilson’s Black Chronicle Book I 1778-1956, a Black history publication whose time has come, will be re-issued for the yearlong 400-year celebration of African American history beginning in January of 2019. HR1242, a bill signed into law in 2018 honoring this celebration, will also honor the many contributions made by African Americans to the building of the USA, despite Chattel Slavery, Jim Crow and 2nd class citizenship. […]

King and LBJ stood together

King and LBJ stood together
[…]