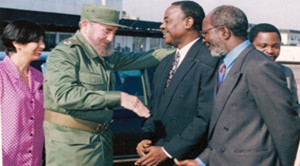 The death of Fidel Castro has been met with varying reactions, including condolences to the fallen Cuban leader’s family by former President Jimmy Carter and President Barack Obama.

For some, like Dr. Benjamin Chavis, the president and CEO of the National Newspaper Publishers Association, remembrance of Castro’s reign will always include his support of the imprisoned Nelson Mandela.

A lifelong and dedicated civil rights activist, Chavis knew first-hand the battles of Apartheid and what Castro did to assist the oppressed in South Africa. Chavis recalled the time he spent shoulder-to-shoulder with Cuban and African troops as they fought against the oppressive South African government during the 1988 “Battle of Cuito Cuanavale.”

In the 1980s, the frontline African nations that bordered South Africa were periodically being militarily violated with the brutal violence and repression that became routine of the Apartheid regime, said Chavis who first wrote about his experience three years ago, in a column published by the L.A. Watts Times.

South Africa invaded South West Africa – which is now Namibia – and the Republic of Angola.

“Castro urgently dispatched more than three hundred thousand Cuban soldiers to Angola over several years to help stop and to eventually defeat the South Africa military on the ground in Angola in 1988,” Chavis said, noting that, by contrast, U.S. President Ronald Reagan tacitly supported Apartheid South Africa and tried unsuccessfully to have a “constructive engagement” with Apartheid under the guise of preventing communism in southern Africa.

Chavis traveled to Angola in 1988 on more than one occasion to witness how Cuba was helping the MLPA (Popular Movement for the Liberation of Angola) in Angola and the ANC as well as SWAPO (South West Africa Peoples Organization).

“I visited the battleground area in the aftermath of the Battle of Cuito Cuanavale that took place during a six-month period from the end of 1987 to the spring of 1988,” he said, noting that that battle was the largest, single armed conventional warfare on African soil since World War II.

Because of his declining health, Castro did not attend Mandela’s 2013 funeral, but Raul Castro did.

Foundation officials quoted Mandela talking about his solidarity with the Cuban government in a 1990 documentary.

“The first country we approached was the United States of America. We could not even succeed to come close to the government, and they refused to assist us,” Mandela said. “But Cuba, the moment we appealed for assistance they were ready to do so and they did so. Why would we now listen to the Western world when they say we should have nothing to do with Cuba? It is just unreasonable.”

Following his death, social media was inundated with posts about Castro, including photos of the fallen leader with Mandela, African-American political activist Angela Davis, Malcolm X and Muhammad Ali.

“[Castro’s] fight for the poor was his religious fulfillment,” said the Rev. Jesse Jackson.

Born near Birán, Cuba, in 1926, Castro successfully overthrew the government to take control in 1958.

Castro was also responsible for fomenting communist revolutions in other countries around the world.

Under Castro, improvements were made to health care and education, while civil liberties were severely eroded.

However, the 1991 collapse of communism in the Soviet Union and its negative impact on Cuba’s economy led Castro to relax some restrictions over time.

Amidst failing health in 2008, Castro officially handed over power to his brother, but he still wielded some political influence in Cuba and abroad.

His death on November 25 at the age of 90 was met with celebrations in strong Cuban-American populated cities like Miami and New York.

“Rosalynn and I share our sympathies with the Castro family and the Cuban people on the death of Fidel Castro,” Carter, the 39th U.S. President said. “We remember fondly our visits with him in Cuba and his love of his country. We wish the Cuban citizens peace and prosperity in the years ahead.”

“We know that this moment fills Cubans in Cuba and in the United States with powerful emotions, recalling the countless ways in which Fidel Castro altered the course of individual lives, families, and of the Cuban nation,” Obama said. “History will record and judge the enormous impact of this singular figure on the people and world around him.”

Trump, who is set to take office on Jan. 20, said Castro’s legacy is one of “firing squads, theft, unimaginable suffering, poverty and the denial of fundamental human rights.”

“Today, the world marks the passing of a brutal dictator who oppressed his own people for nearly six decades. While Cuba remains a totalitarian island, it is my hope that today marks a move away from the horrors endured for too long, and toward a future in which the wonderful Cuban people finally live in the freedom they so richly deserve,” Trump said in a statement. “Though the tragedies deaths and pain caused by Fidel Castro cannot be erased, our administration will do all it can to ensure the Cuban people can finally begin their journey toward prosperity and liberty.”

On a mission to combat issues of heart failure, disproportionately endured by Black Americans yearly, the National Newspaper Publishers Association (NNPA), the largest Black-media resource in the Unites States, took the lead on a very important conversation surrounding heart health and its ongoing negative impacts on people of color. […]