The National Newspaper Publishers Association (NNPA), the Black Press of America trade association, wrapped its 2022 convention in New Orleans with a cruise along the Mississippi River aboard the Creole Queen Riverboat.

But the convention, which celebrated the 195th anniversary of the Black Press in America, wasn’t about smooth sailing – especially given the issues facing African Americans and other marginalized communities.

Following a first-day chairman’s reception, Black Press publishers got down to business, officially kicking off the four-day conference by providing a platform for a new generation.

Mark Thompson, the decorated journalist, and host of the podcast “Make It Plain,” moderated the topic, “Amplifying Voices of Generation Z and Millennials Through the Black Press of America.”

The panel discussed how young African Americans view the importance of the Black Press’s future, emphasizing the need for publishers to enhance their digital presence on platforms like Tik Tok and Instagram.

A General Motors contingent spoke with NNPA President, and CEO Dr. Benjamin F. Chavis Jr. about “The Path to Inclusion is Electric: How GM is Building an All-Inclusive Workforce to Build an All-Electric Future.”

Representatives from GM and Wells Fargo also sat for a live interview on the NNPA’s national news program, “Let It Be Known.”

“I want NNPA Publishers to think digital,” Steed exhorted as he led a discussion, “Steps to lead to making money; criteria for hiring the right people, OTT (Over the Top), changing the mindset to become a media mogul.”

The Baltimore AFRO and The Final Call were big winners at the NNPA Fund Messenger Awards, which included the presentation of scholarships to underserved students.

Arnwine told a captivated panel that their organization had recorded 72 voter suppression tactics to prevent a large population from casting ballots.

Among them are strict voter laws in many Republican-led states, deceptive practices like robocalls; early voting cuts; and voter intimidation.

Dr. David Childs, a professor of Black Studies, Education, and History at Northern Kentucky University, led a discussion on the “Black Press and the Antidote to Racism in America” with the Houston Defender’s ReShonda Tate-Billingsley and Aswad Walker.

Nissan joined NNPA Chair Karen Carter Richards in a discussion about the automotive company’s DEI and philanthropic initiatives and the importance of the Black Press in corporate America.

Zillow officials also hosted a presentation on “The State of Black Homeownership in the U.S.”

At the same time, Reynolds tackled the topic, “Recognizing the Black Press and the Role it Plays in Black America.”

Mills, who first gained fame as “Dorothy” in the Broadway hit “The Wiz,” performed some of her most iconic hits, including “Home” and “I Never Knew Love Like This Before.” 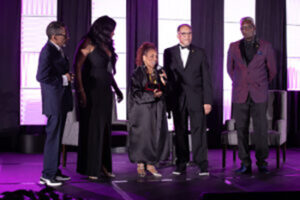 Many in attendance agreed the conference proved among the best in the NNPA’s 82-year history.