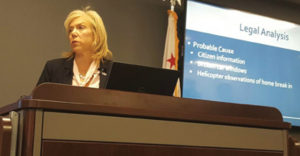 Sacramento County District Attorney Anne Marie Schubert discusses the findings of her department in front of reporters. Ms. Schubert has decided not to file charges against the two officers who killed unarmed Stephon Clark on March 18, 2018. (OBSERVER photo by Antonio R. Harvey)

SACRAMENTO — Nearly one year after Stephon Clark was shot and killed in his grandmother’s backyard, Sacramento’s District Attorney has decided not to press charges against the two Sacramento Police Department officers who gunned down the unarmed 22-year-old.

At a press conference, Sacramento County District Attorney Anne Marie Schubert said the officers were justified in unloading 20 shots at Clark while they were chasing a suspect in the Meadowview neighborhood in south Sacramento March 18, 2018.

Ms. Schubert outlined several reasons as to why her office felt officers Terrence Mercadal and Jared Robinet were justified in their killing of the father of two. 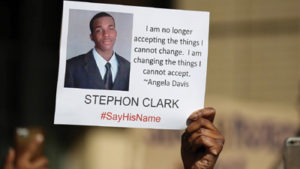 Spending about an hour and a half laying out information like a courtroom case, Ms. Schubert said Clark was in, what she called, “a shooting stance” and said officers saw a “flash of light” giving them the impression that Clark had fired a weapon at the officers. Clark was unarmed with only a cellphone on his person. She also detailed other information concerning things she believed that “weighed heavily” on Clark’s mind such as text messages with the mother of his children, and internet searches about suicide.

“We ask our question that we started out with again, and that question is: was there a crime committed?” Ms. Schubert said in front of many members of the media at the District Attorney’s headquarters. “When we look at the facts and the law, and when we follow our ethical responsibilities, the answer to that question is, no.”

The District Attorney’s office has been under scrutiny over the last few years following several officer-involved shootings in the County resulting in the death of several African Americans. However, the DA’s office has yet to charge any law enforcement officer related to any of the killings.

The decision to not press charges, while expected by most, has drawn outrage in the African American community, and protests are expected over the coming days and weeks ahead.

“The DA’s office should have sent a message to law enforcement that these senseless killings will result in prosecution to the full extent of the law,” the Greater Sacramento NAACP said in a statement released immediately following the press conference.

Members of the Clark family held a press conference at the home where Clark was killed.

“We’ve been sitting for a year patiently allowing her an opportunity to do right and she has failed us,” said Stephon Clark’s mother, Sequette. “I’m praying that the Attorney General will pick up where she failed.”

The highly publicized Clark shooting sparked weeks of protests and disturbances last year by area residents of all backgrounds. California Attorney General Xavier Becerra was brought into the investigation at the request of Sacramento Police Chief Daniel Hahn last year. Chief Hahn and the Sacramento Police Department handed over results of its investigation to the District Attorney in Oc