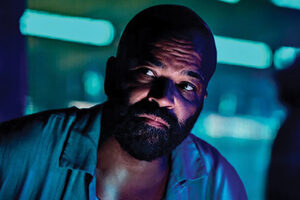 It’s a farewell. An elongated sendoff James Bond fans will instinctively desire. And they should. As should any action film enthusiast who likes a dash of style mixed in with their adrenaline-rush martini.

James Bond (Daniel Craig) has retired from the game and MI6. He is not happy when his buddy CIA agent Felix Leiter (Jeffrey Wright) shows up in Jamaica beseeching him to find a missing Russian scientist (David Dencik) who may have created a bioweapon that could now be in the wrong hands. It’s a request the old 007 wants to refuse. A sojourn that could bring him too close to his destiny.

Four heads brainstormed and created the premise and script that takes the most iconic secret agent in movie history on a doozy of a journey: Neal Purvis, Robert Wade, Phoebe Waller-Bridge and writer/director Cary Joji Fukunaga. Working from their blueprint, Fukunaga (Beasts of No Nation, True Detective) masterfully directs the brilliant cast and an ultra-stellar tech crew through their paces until he has fashioned a 2hr 43min polished action/espionage/thriller that crescendos and crescendos until the audience is drained dry. 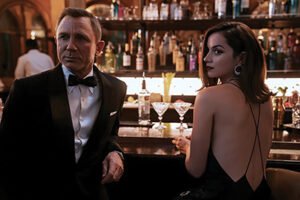 There will be debates for a lifetime about the “best” James Bond. What won’t be in that testy conversation is who was the most skilled actor and athlete. That would be Daniel Craig. His air of sophistication, lack of chauvinism and sensitive interactions with the new era of Bond women will leave him on a throne that few can approach.

Bond’s cavorting and rescue attempts are helped immensely by the leading women: Léa Seydoux as a love interest, Lashana Lynch the new 007, Naomie Harris the ever-ready Moneypenny and Ana de Armas a fellow agent. The male actors have gusto too: Wright, Ben Whishaw as Q the gadget man, Ralph Fiennes as M and Rami Malek as a pockmarked faced evil doer.

The locations (Southern Italy, the Faroe Islands, London, Norway and Jamaica) give fans all the exotic locals and bustling urban sites they crave. Car chases, motorcycle rides, running like gazelles, propelling off bridges tethered by a rope—it’s all here. Tension is pretty much nonstop from the opening scene with a perilous iced-over pond to the closing moments just seconds away from Armageddon. Find the scientist, stop the world from impending disaster, hunt down the bad guys and save the innocent using quirky, new inventions and wit. Basic elements viewers have come to expect abound. 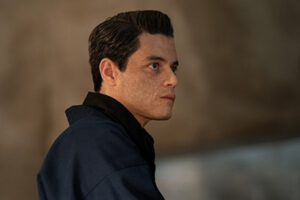 The finest tech team money can buy delivers on the visuals. Plush homes to high-tech labs are stunning to view thanks to production designer Mark Tildesley. Scandinavian forests, Jamaican shores and London streets look inviting because cinematographer Linus Sandgren lights and frames them impeccably. The classiness of the cast’s clothes is eye-catching without stealing the show. And for anyone unimpressed after an initial radio, streaming or YouTube listen to the theme song “No Time to Die,” sung by Billie Eilish and written by Eilish & Finneas O’Connell, the tune is far more impressive and haunting, in context, as it’s played over the opening credits.

Fukunaga and editors Elliot Graham and Tom Cross are champs at keeping the scenes jumping, blending them into each other in a dazzling array. However, there are lapses that will test some viewers’ patience. Chiefly during one-on-one conversations that go on too long. e.g., M and Bond catch up on old times after their separation, and what should take seconds feels like tiresome minutes. Bond and Lyutsifer Safin (Malek) exchange barbs in a crucial scene, way past the point of the dialogue. Also, the plotting gets very dense and convoluted.

In contrast, there are moments when the verbal exchanges are just right: Bond and Madeleine put their cards on the table. She: “There is something I need to tell you.” He: “I bet there is.” Turns out her declaration is a gigantic understatement, and his response only skirts his mixed emotions. Here, shorter is stronger. Considering the nearly three hours of running time, every moment should be vital. The 23-month wait was plenty of time for the filmmakers to sit in a room and cut the footage down to bare minimum.

The entire ensemble cast shines. Malek seethes and hisses as the villain. Seydoux’s portrayal of Bond’s lover is so deceptive she keeps you guessing. Daniel Craig’s complete devotion to the character makes this Bond and this movie as vital as any film in the franchise will ever be.  He’s all in.

When the final credits roll, many viewers will wonder who will be the next James Bond and how can anyone fill Craig’s shoes? There will be a successor. There always is. Wait for it.  Or as the vile Lyutsifer Safin warns Bond: “Life is all about leaving something behind.”