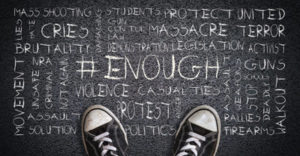 If legislators and police can criminalize protests, America’s democracy is imperiled.

With protests growing increasingly common around the country, the movement to silence those who exercise their First Amendment Rights is fast gaining traction.

At least that’s the opinion of one North Carolina attorney who said the wave of legislation to criminalize protests has hit Charlotte where a controversial ordinance known as the “Extraordinary Event” law even led to a city councilman being charged for carrying a water bottle and a gas mask.

“That ordinance permits police to stop and search residents based on what they deem are extraordinary events, which is an exceedingly vague phrase,” said attorney Darlene Harris.

“For instance, in 2016, my client, Braxton Winston, who was attending demonstrations following the fatal police shooting of a Black man, Keith Lamont Scott, was arrested for having a water bottle and a mask – items apparently prohibited by law enforcement,” she said.

“It’s one of those laws that people hardly know about and, of course, ignorance is no defense for breaking the law, but even another client of mine, Gloria Merriweather, who attended the same protest, was charged with in-citing a riot for just being in attendance,” Harris said.

The charges against both Winston and Merriweather were eventually dropped but Harris said it’s because of their standing in the community and because they had a good lawyer.

“If it were a public defender and someone of little means or impoverished, they would have a difficult time fighting the charges because you think about the many days, they’d need to take off from work to go to court and the loss of income,” Harris said.

Harris recently defended Rayquan Borum, whom prosecutors charged him with first-degree murder, and they sought to use the theory of felony murder in convicting him.

Typically, felony murder is applied when someone is in the process of committing an inherently dangerous felony.

In North Carolina, felony murder is punishable by life without parole.

In the Borum instance, the underlying felony was rioting at the 2016 protests connected to the Scott shooting.

“Rioting was used as the underlying felony, but it raises legal questions like whether all of those at the protest were engaged in a riot just because of their presence and if someone dies by means other than intentional homicide, are all the attendees responsible,” Harris said.

While Borum was convicted of second-degree murder, the jury failed to convict him on the more serious first-degree murder charge.

“It was a 9-3 split for conviction but thank God we had four black women on that jury who just wasn’t going for that,” Harris said.

She noted that since President Donald Trump took office, protests have become even more commonplace and not just among African Americans.

“Looking at the current administration, we are going to have an uptick in protests because the president’s policies are not only affecting African Americans and minority communities, he’s affecting women now and you have more than just one outraged community,” she said.

So, as states and municipalities attempt to criminalize or make demonstrations more difficult, Harris said it’s her job as a defense attorney to keep fighting against such laws.

“You’re seeing this strong rise in people who are dissatisfied in what’s happening,” she said.

“[Governments] are trying to keep control and when you have someone in office like Trump who is causing so much of a stir and so many issues and problems, you’re going to have mass amounts of protests because he has no plans to change his behavior.”

Harris said if legislators and police can criminalize protests, America’s democracy is imperiled.

“Had North Carolina been successful in convicting my client under the felony murder theory, it would have set a precedent that would have reverberated across the country,” she said.

“I fear the growing anti-protest sentiment coupled with deeply entrenched racism will only invalidate citizens’ First Amendment rights but will also criminalize people who choose to take a stand against injustice,” Harris said.

Where did the Black banks go?

Where did the Black banks go?

Memo to Republicans: I Was Kanye, Before Kanye

I have had enough of the Kanye West-Donald Trump “bromance.” KANYE WEST IS NOT A REPUBLICAN NOR IS HE A CONSERVATIVE!

(BAHLT) is closing out its 40th Anniversary with a celebration unlike any other. Comedian Rickey Smiley is set to bring all of the laugh out loud fun this year as the grand host for the 3-day party for Soul Basel, […]