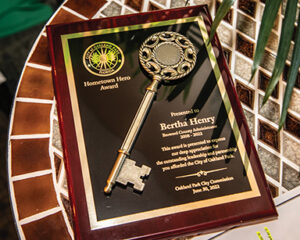 “During the eight years I have been here, there has been no single individual outside of our city who has been a stronger proponent of our efforts to raise up our community,” said City Manager David Hebert. “As County Administrator, Mrs. Henry never questioned what we were trying to achieve. She was always supportive and encouraged our efforts on several projects, from the Community Redevelopment Agency loan-to-grant-conversion, to the new Sky Building and the need for COVID vaccines. On every single issue, she was always there, always supportive, always our champion,” Hebert continued.

Mrs. Henry was instrumental in several projects in Oakland Park. Under her leadership the city secured more than $6 million for community redevelopment projects, including Main Street streetscaping and fountains, the Grand Plaza at Jaco Pastorius Park, and other improvements that served as a catalyst for the revitalization of the downtown.

She furthered efforts to enhance public safety and community aesthetics with roadway projects on Andrews Avenue, Northwest 21 Avenue, and Prospect Road. She worked with the city to coordinate incentives to facilitate the Sky Building project, a mixed-use development on Dixie Highway that will include the new Oakland Park City Hall.

Mrs. Henry’s unwavering support and devotion to Oakland Park will leave a legacy on the community. The Oakland Park City Commission voted unanimously on June 15 to recognize Mrs. Henry with a Key to the City.