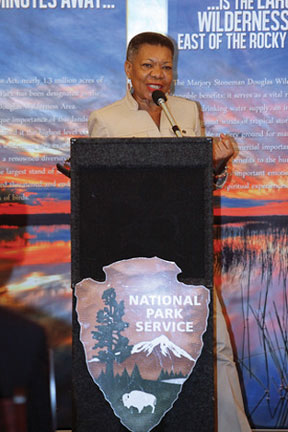 Our environment keeps the past present

Approaching this sacred day of celebration, I am flooded with reflections of Thanksgiving 1995 – almost 20 years ago now, when Frank and I came back from our round-the-country road trip with stars in our eyes. Having seen a glorious side of America that we had only dreamed existed, we were bubbling over with desire to share the National Park System with everyone.                           It wasn’t long before we noticed that some people’s eyes began to glaze over when they saw us coming as we were raving about assets that most of our peers did not know exist.

To our delight, the Westside Gazette newspaper completely welcomed us and our epiphany. The family owned, community-focused Black weekly was undergoing a transition in leadership from the father/founder Levi Henry, Jr. to the son/publisher, Bobby R. Henry, Sr. and his siblings.

A passionate outdoorsman, hunter and fisherman, Bobby immediately resonated with the idea of promoting the enjoyment of our wonderful “Great American Outdoors” to a wider segment of the community, and published every ecstatic article we wrote extolling the virtues of the national parks.

At a meeting of the Broward County Audubon Society a few months later, we heard about the plan to restore Florida’s Everglades, with Everglades National Park as the centerpiece. We learned that the restoration was vital to South Florida’s future as it was necessary to provide water for an expanding population, and that it was important to the rest of the country that cared about the park, one of approximately 365 units nationwide. We also learned that citizen participation was imperative if the restoration was to succeed.

With dazzling vistas of the Grand Canyon National Park, the geyser fields of Yellowstone National Park and the 2,000-year-old giant sequoia trees of Yosemite National Park dancing before our eyes, we threw ourselves into the effort to help inform and engage African Americans in the restoration effort.

Simultaneously, we learned about the environmental injustices meted out to local communities, and strove to bridge the gap between white conservation organizations and Black community activists. As the years passed our excitement was tempered with consternation as we learned how our climate is changing and what those changes might mean for our environment and people.

Throughout the entire time the Westside Gazette has been our consistent partner, disseminating every iota of information that we shared. The Gazette truly showed what it means to be a “community-focused” newspaper, standing with us whether we were trying to appeal to the U.S Congress or the national association of Black newspaper publishers. (NNPA.org)

Fast forward to the present day, when climate change and its effects are widely accepted as a reality with which we must deal. South Florida is squarely in the bull’s eye for flooding as sea levels rise and city and county governments are well advised to prepare their citizens to adapt to in-evitable changes.

In 1995 we had no idea that we’d be here today, on the verge of the 100th Anniversary Celebrations of the National Park Service August 25, 2016.

The agency which manages our National Park System will soon launch a national public information campaign, something we have advocated throughout the years. This Thanksgiving, we are so grateful for the opportunity to bring those “obscure” discoveries from 1995 up to the present and beyond, and grateful for our Gazette partners who enable us to bring you information that will be vital to our mutual future.

“Mass incarceration is the greatest moral and racial injustice of our time,” Lauren-Brooke Eisen, the senior counsel and Inimai Chettiar, the director of the Justice Program at the Brennan Center for Justice at NYU School of Law, wrote in a 2016 editorial for Time Magazine. […]