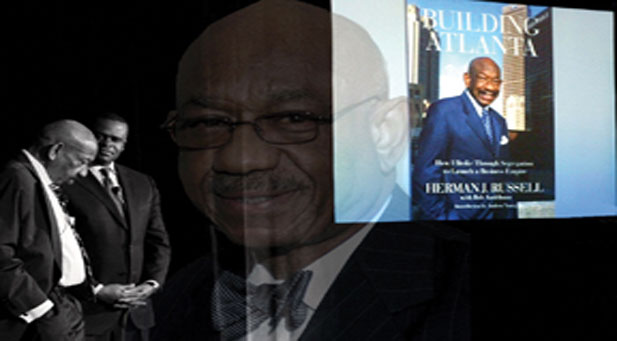 By John B. Smith, Sr. Special to the NNPA from The Atlanta Inquirer

ATLANTA, GA (NNPA) – Herman J. Russell, the native Atlantan born in 1931 from humble beginnings in the Summerhill community who ultimately grew to become founder of the nation’s most influential African American construction and property management company in southwest Atlanta, from a plastering business in the ’50s – made transition, on Saturday, Nov. 15, following a brief illness. He was 83 years old.

Along with being an inimitable and distinctive business leader and icon, who created H.J. Russell & Company, Russell was also a formidable community and civic leader, as well as author of his recently released autobiography, Building Atlanta: How I Broke Through Segregation to Launch a Business Empire. He inspired many with words of wisdom, and assisted financially local and national political leaders, and office seekers.

“H. J. Russell was a man of means – but his conscience and his values were always greater than his wealth,” Jesse Jackson, Sr. remarked last weekend via Twitter. From being the first African-American member of what was then called the Atlanta Chamber of Commerce to being an inaugural member of the board of directors of the Dr. Martin Luther King, Jr. Center for Social Change, Inc. (The King Center).

Along with a myriad of other community and corporate boards, Russell, after retiring in 2003 from his company, continued to be an in demand speaker with business classes, as well as for various corporate settings, channeling his business acumen to future business owners and leaders for the growth and economic advancement.

“He made his transition in a peaceful way,” said his son, Michael, who serves as CEO of his father’s firm.  “We know he’s at rest.”

He continued, “He was elated and proud of the fact that he was able to share his legacy with others and, most importantly, his grandchildren.  Herman Russell had a major impact on many of us, and he lived a great life.”

Herman Russell – known city- , state- and nationwide for his formidable business knowledge and acumen – has received many plaudits since his passing on Nov. 15.

U.S. Rep. John Lewis [D-Ga.] said, “Herman J. Russell was one of the founding fathers of the new Atlanta. He was a powerbroker who helped transform not just the skyline of one of the country’s greatest cities; he helped redeem the soul of America.  Russell was a tower of strength who used his sharp mind and business know-how to become a major player in Atlanta’s business community.

“Russell was also a visionary, as well as a ‘silent partner’ in the most transformative movement of the last century in America and continually involved in shaping the cultural, political and economic landscape of Atlanta. The entire nation is indebted to Herman J. Russell for the vision of hope and progress he had for Atlanta and the country. He was an unforgettable philanthropist, a wise corporate citizen, a shrewd businessman and my dear friend. He made an indelible mark on the city of Atlanta and the nation – and he will be deeply missed.”

Rev. Bernice A. King, chief executive officer of The King Center, stated, “It is with great sadness and heavy hearts that the King Center acknowledges the passing of one of Atlanta’s extraordinary civic leaders and entrepreneurs, Mr. Herman J. Russell. He served with dedication and distinction as a former King Center board member, and he was a beloved personal friend and supporter of both my father, Dr. Martin Luther King, Jr., and my mother, Mrs. Coretta Scott King. I will always remember with fondness the times that I spent in his family home playing with his children.

“The world and Atlanta have indeed lost a remarkable individual and humanitarian. Mr. Russell will be sorely missed by many, but he leaves behind an exceptional legacy of community concern and corporate social responsibility that will be continued through the outstanding work of his children.”

Atlanta-Fulton County Board of Commissioners’ Chairman, John Eaves stated, “It is with great regret and immense sadness that I’ve learned of the passing of an Atlanta icon: Herman J. Russell. He was not just a local businessman, but a visionary and one of the men who built Atlanta as we know it today. He left his indelible mark on our city’s skyline as one of the developers who constructed some of our region’s iconic structures.

“However, I believe the most important part of Mr. Russell’s legacy is what we don’t see in that he built himself up from the bottom to ultimately serve as a role model for so many Atlantans of all races. His legacy in our region is well established, and while Atlanta has lost a builder, developer and philanthropist, I have lost a dear friend. It is a loss that I and so many others share.”

Along with his son Michael, Russell leaves to cherish his memory: his wife, Sylvia; another son, Jerome; daughter, Donata, several grandchildren and a host of other relatives and admirers.

John B. Smith, Sr., second vice chairman of NNPA and publisher and CEO of The Atlanta Inquirer, said, “It is with deep sadness and a heavy heart that I comment on the death of my friend, business associate and brother of the ‘common good,’ Herman J. Russell. During my friendship with Herman for more than 50 years, following the founding of the historic Atlanta Inquirer, we were mentor and mentee in the early years; however, as we grew within Atlanta, he became more than just a mentor and friend. Our association became a kaleidoscope of beautiful colors that included our wives and children integrating with each other.

“Whether at The Inquirer or with our respective families, he supported me to the very end, and I will always be most appreciative of that respect and friendship. Herman J. Russell was a distinctive contributor to the city of Atlanta, as well as for the nation, with his creative building structures, along with his generous philanthropy to schools and other organizations. However, to me, he was my true ‘brother in Christ’ – and I shall never forget our decades-old friendship and what he meant to me, my family, the city of Atlanta, the nation and the world.  Atlanta has lost a socially conscious native son. However, the nation has lost a genuine and sincere ‘chaplain of the common

Veterans and consumers of color often targeted for fraud

Veterans and consumers of color often targeted for fraud
[…]