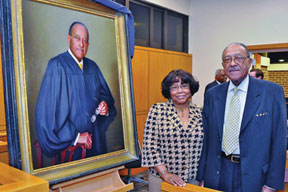 Former North Carolina Supreme Court Justice Henry Frye Sr. (r) and wife, Shirley, stand next to a portrait of the former Justice commissioned by the UNC Law School Class of 2013. The portrait is the first of an African American to grace the walls of UNC School of Law.  (Photo courtesy of Norris Greenlee)

By Afrique I. Kilimanjaro Special to the NNPA from The Carolina Peacemaker

The Graham Kenan Courtroom at the University of North Carolina School of Law is considered the premier training ground for young law students who aspire to be trial attorneys. The courtroom classroom, originally built in 1968, has been renovated to accommodate 21st century technology.

It resembles many court-rooms across the country with tables for the plaintiff, defendant and their respective counsels, a judge’s bench, a place for a court recorder and court clerk, a witness stand, jury box and a court gallery for the public to sit and listen to the proceedings. The courtroom walls of Graham Kenan hold the portraits of famous former North Carolina Supreme Court Justices and former UNC Law School deans.

This year, a portrait of former North Carolina Supreme Court Justice Henry Ell Frye Sr. will be added to the court-room wall. Frye’s portrait, commissioned by the Class of 2013 as a gift to the law school, was presented on Nov. 14 in an un-veiling ceremony. The portrait will be placed on the wall of Graham Kenan to inspire future generations of law students, attorneys, law school professors and visitors.

Frye has accomplished several firsts in his career and his portrait, which will hang in the courtroom in perpetuity, is the first portrait ever of an African American to grace the law school’s walls.

Henry Frye is no stranger to being “the first” in accomplishing many endeavors and overcoming adversity. The seasoned attorney and public servant said he never set out to be first. He explained, “I just wanted to do what was right and help others along the way.”

Frye became the first African American first year law student to enter the University of North Carolina at Chapel Hill School of Law. He graduated with honors in 1959.

In 1963, almost four years out of law school, Frye became one of the first African American  Assistant U.S. Attorneys in the South. As far as being a first, Frye said, “You do the best you can because you want to set an example for others.”

The idea for a portrait of Frye was spearheaded by Jeremy Collins, the 2013 law school class president along with his classmates and gift committee members Charlie Hiser and Judson Williamson. Collins said he looked at the other portraits on the walls throughout the law school and there were no African American faces to be seen.

Thus, he and his classmates formulated the idea to have a portrait of Frye commissioned and given to the law school as a gift from the Class of 2013. The portrait was painted by notable portrait artist John Seibels Walker of South Carolina.

Frye said he was grateful to the Class of 2013 for honoring him by commissioning the portrait. He also acknowledged that there were a lot of people and family members who helped him throughout his career.

In front of the capacity filled courtroom, Frye also expressed his gratitude for his wife, Shirley of 58 years, and the role she has played in his success as an attorney and public servant. He also acknowledged his colleagues and former law clerks in attendance. “I am grateful to see all of you here,” said Frye.

A jovial Frye recounted his days as a law student and the moment he knew he was “well on his way” in his studies, having earned his first A in a class taught by late professor and law school dean, Maurice Van Hecke, for whom the law school building is named.

This public servant, who grew up in a rural agricultural community in Richmond County, near the town of Ellerbe, N.C., has come a long way from his agricultural roots where he was a member of the New Farmers of America.

Frye graduated valedictorian of his class at Mineral Springs High School and subsequently enrolled at North Carolina A&T College in Greensboro where he was a member of the Air Force ROTC.

He said, “I began my studies in agriculture and then I decided to major in biology. I also developed a love for chemistry because I had a terrific chemistry professor, Dr. Isaac Miller. He was such a terrific professor and I liked the subject so much that I had enough coursework to minor in it.”

Frye married Shirley Taylor on Aug. 25, 1956. It was on his wedding day, he recalls, that he went to register to vote in Richmond County and failed the voter registration literacy test. He said, “I was a college graduate and an officer in the Air Force and I could not pass the test.”

The experience would contribute to Frye developing the resolve to overcome obstacles and rise to be a successful leader and public servant. He enrolled at UNC’s law school in the fall of 1956.

By 1968, he became the first African American to be elected to the North Carolina legislature in the 20th century, serving for six consecutive terms in the N.C. House and one term in the N.C. Senate.

When asked what it was like to be the first African American state legislator of the last century, Frye explained, “If I had goofed up, you see, it would have been much harder for someone else to come along behind me. So I try to set a good example for others to follow.”

And a good example he has set indeed. Since his days as a law student at UNC Chapel Hill, becoming a state legislator and rising to serve as chief justice on the state Supreme Court, Frye continues to blaze a trail of public service for all people to follow. Mark Martin, the current Chief Justice of the N.C. Supreme Court described Frye as a consensus builder who is patient and respectful of the viewpoints of others.

“He is someone who always seeks common ground,” said Martin.

Today, the retired Justice remains as busy as ever and currently works at the law firm Brooks, Pierce in Greensboro.

To those who aspire to enter public service, Frye offers this bit of advice: “It’s a real honor for a person to be appointed or elected to a public office. However, don’t accept the appointment and don’t run for election unless you intend to serve the public with honor.”