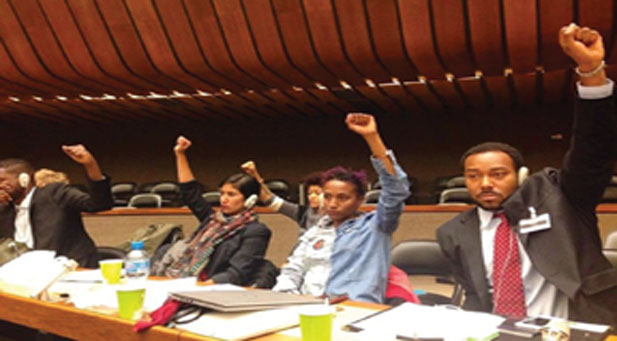 WASHINGTON (NNPA) — The fight for justice in Ferguson has gone global.

Tara Thompson, a corporate project manager who has been protesting and organizing in Ferguson since the summer, puts it this way: “It is unbelievable that I am staring down at a sniper rifle, pointed at me that was paid for with my taxes. The United States should be outed. They police the world, telling everyone in other countries how to treat their citizens, how to implement democracy, and their own backyard is not clean.”

Thompson recently delivered that is message to the world as a member of the Ferguson to Geneva delegation, which traveled to the world capital of peace for the 53rd session of the United Nations Committee Against Torture.

The delegation included Michael Brown’s parents, Lesley McSpadden and Michael Brown Sr., one of their attorneys, Ferguson protesters, activists, and human rights lawyers working in the community. Their message was simple: the racial profiling and brutality reflected in Brown’s killing but also embedded in American law enforcement, as well as the militarized response to Ferguson protesters, are all violations of the Convention against Torture and Other Cruel, Inhuman or Degrading Treatment or Punishment.

The delegation spent three days attending hearings and testifying before the Committee, which monitors how well the participating nations up-hold this treaty.

“We live in a society that tells Black people racial profiling ‘is not that bad,’ ‘it’s a necessary evil,’ ‘you guys are looting so you deserve it.’ So to have the UN say, ‘No, you’re right, this is a human rights violation,’ is in-valuable,” says Justin Hans-ford, lead organizer for Ferguson to Geneva.

According to the delegates, the receptive and affirming response from the international community was in stark contrast to that of the U.S. government delegation.

“The U.S. government delegation gave a completely inadequate response [to citizen testimonies]. Like, I mentioned that we should have a real mechanism to make police departments accountable for profiling—financially accountable,” Hansford says. “And the response was, ‘we already have a mechanism, you can sue them.’”

Hansford, who is also an international human rights law professor at Saint Louis University, points out that not only do civil suits take years to settle, but police officers’ legal costs are covered by their departments, unlike the costs for victims of police brutality/excessive force and their families.

In addition to oral testimonies, the Ferguson delegation also submitted a report on the shooting of Michael Brown and the militarized police response to nonviolent Ferguson protesters. Presented by Brown’s family, the Coalition for Black Struggle, Hands-UpUnited, and Missourians Organizing for Reform and Empowerment, the report weaves testimony from protestors, the committee’s past recommendations to the United States, and the delegation’s own recommendations to the U.S. government.

“Recent incidents of police brutality, including the choking death of 43 year-old Black man Eric Garner by a New York police officer who used a choke-hold banned by the NYPD, and the shooting death of 25-year-old unarmed Black man Ezell Ford by a Los Angeles police officer underscore the U.S.’s failure to adequately address brutality and racial profiling by law enforcement.”

Jordan Davis’ killer to be jailed for life

Jordan Davis’ killer to be jailed for life
[…]

3 Things You Need To Know About Marketing

Marketing is the elusive magic that all business and brands must have in order to attract their target market. However, marketing can be difficult for some to understand and seemingly costly. As a result, it becomes necessary to market ourselves as much as our brand because on all levels, but especially the local levels, people do business with people they know, like and trust. […]