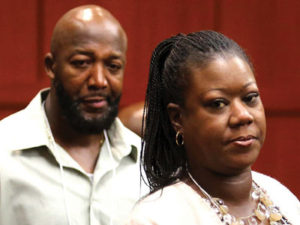 Parents of Trayvon Martin say the Weinstein Co. owes them $150,000

The parents of slain teenager Trayvon Martin say The Weinstein Co. owes them at least $150,000 for optioning the film and television rights to their book about the 2012 shooting of their son and the blossoming Black Lives Matter movement in its wake.

Sybrina Fulton and Tracy Martin filed documents in Delaware bankruptcy court, saying The Weinstein Co. and its television unit entered into a deal to purchase the rights to a possible movie and television series based on their book, Rest in Power: The Enduring Life of Trayvon Martin, reports Deadline.com.

The parents say they are owed at least $150,000 as executive producers of the television series, episodes of which have been filmed but not yet aired. The Weinstein Co. also optioned the movie rights, though the studio has not yet exercised this option.

Trayvon Martin was fatally shot by George Zimmerman as he walked home from a convenience store in Florida. Zimmerman was acquitted of charges in connection with the death. The book is filled with family stories and anecdotes about Trayvon, which reviewers said provide a complete picture of the teen who was gunned down.

The bankruptcy court approved the sale of The Weinstein Co. to the Dallas private equity firm, Lantern Capital, and is still dealing with claims filed by a number of parties, including actors, writers, producers and other companies.