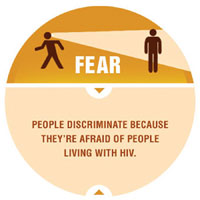 People Don’t Fear HIV; They Fear the Stigma Behind It

One in a series of stories written by the 2017 U.S. Conference on AIDS Social Media Fellows.

You sit in the cold, hard, metal chair fidgeting with your thumbs, heart racing nonstop because you aren’t sure. You recall all of the times you engaged in unsafe sexual practices over the last three to six months. You try your best to reach deep within your memory for every sexual experience you shared and with whom, and your anxiety starts to peak. The nurse calls you back into the quiet room that now feels more like a cell than a doctor’s office. “Am I HIV positive?” you wonder, trying to gather cues from her facial expressions to see if you can guess your results before she tells you. But she’s been trained to have a master poker face, and all you want to do is scream at the top of your lungs, “Tell me!”

This scenario plays itself out daily in waiting rooms across the United States. Because in order to end the HIV epidemic, individuals must get tested to learn their status. People who receive a positive result must begin treatment, both to help prevent the further spread of the disease and to keep them-selves from developing AIDS. Fear and stigma are among the behavioral and societal factors that prevent such people from simply getting tested. Because of them, those faced with positive test results dread the stigma attached to being HIV positive, so they try to hide in the dark.

Before we can end the epidemic, we must end the stigma attached to it. Life with HIV is not the same as it was 30-plus years ago. The number of deaths caused by HIV has decreased with advancements in medicine and research, and people living with HIV who are diagnosed early and take their medication can have life expectancies similar to those who are not.

“People don’t fear the virus; they fear the stigma behind it,” said George Johnson, co-founder of Black, Gifted, & Whole, an organization whose mission is to empower, educate and mobilize Black gay men by acknowledging, celebrating and affirming their whole selves. Today people see that they can live long lives after being diagnosed with HIV, so the previous fear that you only had a few years left to live exists no more. People fear the stigma, phobia and hate they can and will face by being HIV positive far more. The Huffington Post ran a story in 2015 in which a dozen HIV-positive men read messages they’d received from people on the gay dating app Grindr. The messages were cruel, mean and heartbreaking. “In a very real sense, stigma helps to perpetuate HIV,” the article said.

Societal norms shape the way we act and react to everything in our daily lives. If we can reshape the way we respond to HIV, then we can eradicate the stigma attached to it. HIV is not a gay disease. HIV is not a Black or poor disease. HIV does not discriminate based on age, race, sexuality or religion. Only after we tackle the stigma battle can we tackle the virus itself. Many individuals who have tested HIV positive do not accept the care available to them. For some, taking a 30-mile ride to a city they don’t live in to receive care in a place where their own community isn’t privy to their status is a serious issue.

Organizations like UN-AIDS and NASTAD have each created an HIV-stigma tool kit that helps teach ways to avoid and eradicate stigma that people living with HIV as well as those vulnerable and at risk face.

Take a look in the mirror, and for a second imagine that it is you waiting for a nurse in a testing center to tell you your HIV status. Or that you are HIV positive and you now have to get up and start your day. If the roles were reversed, would you now take a stand?

Howard Winchester is a communications associate with NASTAD helping to spread positive messaging to end the epidemic of HIV.