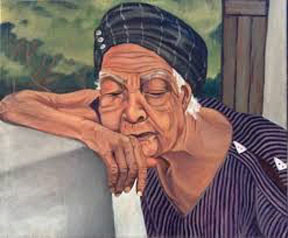 ‘Pi to li led li la’, which translates to ‘rather she be ugly but here.’

I sit engrossed in the words of Philomena Sabin, a 106-year-old Haitian woman in Pompano Beach, as she reminisces of what she has seen over the last century. I have asked for an interview for an article I am writing this week in the Westside Gazette. Her skin, as soft as a newborn baby and covered by spots of faded pigment, is proof of presence beneath the sun over the last century.

In Creole, she speaks of her childhood in great detail. She has memories of playing in the plantain fields and going washing in the river with the other girls.  The boys and men would go fishing far out in the ocean.

She was born on the little Provence Bord de Mar area near where she was raised in the Northern part of Haiti. She spoke of waking up with the sound of the rooster’s crow and smells of burning charcoal. She laughs to herself as she tells us how beautiful she was then. “I say, “Tante, Ou toujour belle”, “Auntie you’re still beautiful”, a comment that received no reply.  She snaps back into the present time and mentions the names of her now departed sisters, their fights and wasted years of not speaking to one another over things that seem so trivial today. She talks about what she wishes she could instill into the young Haitian woman of today. “Sometimes the pain I feel in my heart covers the pain of these old bones”, she says, as she repositions the slipping silk scarf around her head; “Just thinking of all the time that has past and all that could have been different.”

When asked to elaborate, she shakes her head and touches the plastic crucifix she wears over her housedress, just above the small moneybag pinned close to her breast for safekeeping. “You kids just don’t believe how fast it all goes by; you do everything so quickly and waste time on senseless nonsense.” She continues, “Like who’s dating who, and who has more money or material things. You judge and call on negativity by laughing at others’ pain. Every day that I wake up is a gift; the funny thing is that, this is one thing that has never changed”.

Hearing these words from a woman of her age has more significance. Although she was speaking globally, I could not help but do some self-reflecting.  For a moment, I feel as if I have been side tracked, while the purpose of this interview was to show the resilience of the Haitian Woman and its correlation to the Country of Haiti and its roots. I giggle and say to her how I could be there all night listening to her stories and words of wisdom, but I need to stay on track with my story.

She shakes her head again and says we have been on the subject from the very beginning. “You see, if you are blessed to live all the years I have lived, you will see that these scars of battle, age and fatigue, what we call life, are only time going by. No matter our appearance in the present, we can always do better through the gift of the passing of wisdom to our young”. Haiti much like this 106-year-old woman, is aged, fragile, and just a shell of what she used to be, but she is still here. I repeat she is still here and filled with everlasting wisdom to share. Pi to li led li la.

What the Sweet Potato Pie Politics & Ice Cream event is

The Westside Gazette’s Editorial Board or The WEB political forum, aptly titled, “Sweet Potato Pie, Politics & Ice Cream”, is a grass roots effort spearheaded by WEB to make politicians more accessible to voters within the Broward African American community and to focus attention on issues which have a direct impact on their community. […]