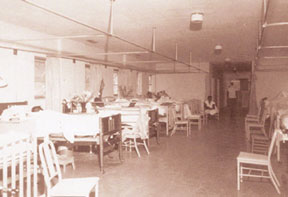 There are parallels that can be drawn between the world’s treatment of the continent of Africa and the conflicting solutions proposed to address the “community blight” along the Sistrunk Corridor.

Since the toppling of colonial systems beginning in the late 1950s, international agencies and governing bodies have hammered Africa with free aid and social services, continuing the dependent relationship between the continent and its former colonial masters. Despite its proven ability to empower, capacity building, a form of aid that teaches individuals skills that support economic and political development, remains controversially contested as free food, free clothing, and free money continues to pour into Africa and, most times, into corrupt pockets. This has stifled the advancement of our beloved motherland.

How does this connect to the Von D. Mizell Center?

Like Africa, there are multiple voices debating the best strategy to revitalize the Sistrunk Community; however, the two dominating opinions represent an argument for the need of social services from external sources and the demand for community based economic empowerment. Both arguments consider the Von D. Mizell Center vital property to usher in their respective visions.

No one can argue the Sistrunk community is in dire need of help. Years of economic neglect has left the community in disrepair. Just a walk or a drive during any hour of the day reveals issues of homelessness and drug addiction. That is reality. According to Cheryl Woods, President of the YMCA of South Florida, building the L.A. Lee Family YMCA is the direct way to address these issues.

“All we’re trying to do is to do good for the community,” Woods stated, “It seems logical that [the Mizell Center] would be a good location to truly provide services.”

Woods emphasized the land has not yet been given to the YMCA, but they have simply been “investigating the option” and believe the new added programs and services the L.A. Lee Family YMCA is proposing to provide would require a brand new facility. According to Woods, there is not an option to expand or grow at their current location, just two blocks south of the Von D. Mizell Center.

“The new location will give us a bigger footprint to do bigger outreach.” said Woods, adding, “We are really proud of the L.A. Lee YMCA. It is probably the most important in the community.”

Some would argue the most important structure in the community would be the Mizell Center itself. Situated on Sistrunk Boulevard and 14th Terrace, the site of the historical Provident Hospital, the center sits in disrepair and neglect at the hands of the City of Fort Lauderdale. According to Jasmin Shirley, Vice President of Broward Health’s Community Health Services, this has not been the first time.

“The Mizell Center has fallen into disrepair before.” stated Shirley at the “Preserving Our History” meeting held at the historic St. Christopher Episcopal Church, this past Thursday on March 16. She added it was through community input and determination that the building became a social services hub in Fort Lauderdale’s Black community.

Many who attended the meeting argue for the Center to be repurposed as a small business incubator that would draw much needed economic development to the Sistrunk Corridor.

“This community needs an economic engine,” argued Sonya Burrows, Sistrunk business owner and President of the Fort Lauderdale Negro Chamber of Commerce, “A re-purposed Mizell Center could be it.”

“That engine should be run by the people it represents.” Bobby R. Henry, Sr., Publisher of the Westside Gazette, added.

Similar plans to revamp the Mizell Center into a small business hub were proposed years ago, but were not adopted by the city. No one knows why. What is known is demolishing the center and erecting the new L.A. Lee Family YMCA in its place will not provide economic development to the area, a goal that has been touted by the City for years.

“Our biggest issue as Black people, no matter where we are, is money, and we must do what we can to change that,” Com-missioner Dale Holness emphasized at the meeting. As an economic epicenter, the Mizell

Center could help accomplish that goal.

The historical significance of the Mizell Center site was slightly touched at the meeting with ideas on how to reverence Provident Hospital in this fight.

“We have to honor the historical continuity of this land.” Said Burrows.

That fact has not gone unnoticed by the YMCA.

“I have a tremendous amount of respect for the history and legacy of the land,” emphasized Woods. “We think it is important to make the history come alive in our new building, but it requires a conversation.”

“At the beginning of this conversation the community was not even involved, just certain people.” Henry argued.

What has become obvious is the serious need for a candid conversation to take place where both sides are heard and valued. Deborah Mizell, descendent of Dr. Von D. Mizell, agrees.

“We’re almost at a stale-mate,” she stated, “We need to come together and most importantly get the larger community involved.”