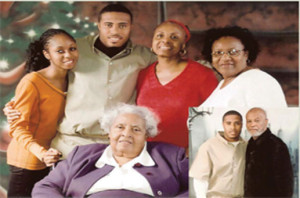 Martin Moore looks to be released from a lengthy prison sentence over the next 18 months due to President Barack Obama’s decision to reduce sentences of inmates who received extremely long prison sentences for non-violent drug offenses.

Michelle Alexander, national best-selling author of the book entitled The New Jim Crow Mass Incarceration in the Age of Color Blindness writes a scathing report on the devastating impact that the criminal justice system has had on people of color from a historical perspective. Here is an excerpt from her work.

“Jarvious Cotton cannot vote. Like his father, grand-father, great-grandfather, and great-great-grandfather, he has been denied the right to participate in our electoral democracy. Cotton’s family tree tells the story of several generations of Black men who were born in the United States but who were denied the most basic freedom that democracy promises—the freedom to vote for those who will make the rules and laws that govern one’s life. Cotton’s great-great-grandfather could not vote as a slave. His great-grandfather was beaten to death by the Ku Klux Klan for attempting to vote. His grandfather was prevented from voting by Klan intimidation. His father was barred from voting by poll taxes and literacy tests. Today, Jarvious Cotton cannot vote because he, like many Black men in the United States, has been labeled a felon and is currently on parole.”

According to TheHIll.com, former President Bill Clinton’s Violent Crime Control and Law Enforcement Act of 1994 implemented funding for tens of thousands of community police officers and drug courts, banned certain assault weapons, and mandated life sentences for criminals convicted of a violent felony after two or more prior convictions, including drug crimes. The mandated life sentences were known as the “three-strike” provision.

Today, groups with diverse constituencies ranging from the NAACP, to Black Lives Matter, and top level officials within the Republican Party are in agreement that the criminal justice system in America is in dire need of reform.

TheHill.com continued, “The law is blamed by some for rising incarceration rates, though as we will explain later, that trend actually began in the 1970s.

Democratic presidential candidate Bernie Sanders — who voted for the 1994 crime bill — has frequently noted on the campaign trail, correctly, that the U.S. has, by far, the largest prison population in the world (though we have noted that his promise to correct that dubious distinction in his first term would be an almost impossibly tall order).”

In his passing the, fight for Martin, which was his objective of the most importance, had to continue. At Carlton’s [Moore’s] celebration of his life and legacy, his pastor, Dr. Simon Osunlana, gave a eulogy that sent tears to most of the crowd, and ignited others to help in the efforts of his dying efforts to see Martin free. That eulogy sparked the creation of the Carlton B. Moore Freedom Foundation.

founder and president Rebecca Jones, lifelong friend of Carlton and aunt to Martin and I, began the extended journey.  Along with other life time friends and family members joined the foundation and the efforts for Martin’s freedom continued.

Fundraising, Memorial events, and college scholarships were all parts of the effort to find opportunities for Martin’s release from federal prison.  These efforts and resources obtained brought about the knowledge of President Obama’s efforts to place into law the reduction of sentencing for nonviolent offenders.    After research and calculation on his case the foundation worked towards putting together the information needed to make Martin applicable for the change in the law.

There were a number of people that came to aid in the project, many wrote letters on Martin’s behalf and new lawyers entered the process which made sure that all of the I’s were dotted and T’s  crossed. Now after a 10, going on 11 years of incarnation, President Obama commuting the sentenced time to a 85% reduction, the fight that our father started is a reality.  He can honestly rest well in spirit knowing that Martin had a release date that he is capable of meeting. Prayers have been answered and a great load of stress has been lifted and replaced with overwhelming praise.

Now that the light at the end of the tunnel is nearing, efforts are being made to bring Martin now 38, back home with an enthusiasm that will carry him in his efforts to reclaim life and productivity.  Martin has always maintained a positive attitude and thought process about his situation and would often write in his letters home that, “My current situation is not my final conclusion.”

The case of local product Clarence Ward took on similar ramifications as pointed out by Attorney’s Daryl Wilcox, with the Federal Public Defenders Office and Johnny L. McCray Jr., who represented Ward.

“I am grateful President Obama saw fit to exercise his constitutional clemency power to commute Mr. Clarence Ward’s sentence from life in prison to 20 years. This is part of a broader effort the president has taken to reduce unduly harsh penalties handed down at the height of the war on drugs.  While the President’s commutations are a much welcome step, more has to be done. Accordingly, I urge the Congressional leadership to support his effort to reform our broken criminal justice system. The lives of the thousands of nonviolent offenders who are sitting in our jails, many of whom are innocent of the crimes for which they were convicted, are too important to wait for acts of presidential pardons and clemency,”  Johnny L. McCray Jr.