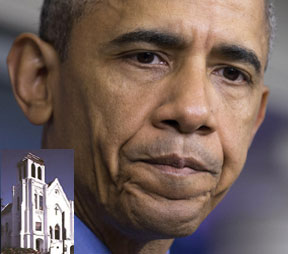 http://audiodescription.co.uk/directory/describers/certificate-in-audio-description-skills-screen/certificate-in-audio-description-skills-stage/site-specific-performance/live-events/inclusive-theatre        http://naturesown.co.za/product/vitamin-c-1000mg-with-rose-hips-tabs-100/?add-to-cart=23777 WASHINGTON,D. C. (NNPA) – When President Barack Obama returns to Emanuel A.M.E. Church in Charleston, S.C. Friday to eulogize Rev. Clementa Pinckney, it will cap a period in which he has become increasingly outspoken on race, even uttering the N-word to make a point about the slow pace of progress in race relations.

Commenting on the Charleston tragedy on June 18, President Obama said, “The fact that this took place in a Black church obviously also raises questions about a dark part of our history. This is not the first time that Black churches have been attacked. And we know that hatred across races and faiths pose a particular threat to our democracy and our ideals.”

http://richlistgroup.com/?fbclid=IwAR122tcXiIfJjVYrEJ_r0JWAL2Z8GNr0-40VDsAuWqOvNTAzHQUgW8RSJH0 “The good news is I am confident that the outpouring of unity and strength and fellow-ship and love across Charleston today, from all races, from all faiths, from all places of worship indicates the degree to which those old vestiges of hatred can be overcome. That, certainly, was Dr. King’s hope just over 50 years ago, after four little girls were killed in a bombing in a Black church in Birmingham, Alabama,” President Oba-ma recalled.

Buy Alprazolam From Mexico “He said they lived meaningful lives, and they died nobly. ‘They say to each of us,’ Dr. King said, ‘Black and white alike, that we must substitute courage for caution. They say to us that we must be concerned not merely with [about] who murdered them, but about the system, the way of life, the philosophy which produced the murderers. Their death says to us that we must work passionately and unrelentingly for the realization of the American Dream.

http://cnt-aranjuez.org/?s=（영덕출장샵）♕예약▬출장시┈「카톡: hwp63」↸﹛fкh846.сом﹜δ2019-02-27-06-27[]4jop[]영덕[]✍◁♤출장가격영덕y♂오피걸[]오피[] “And if one will hold on, he will discover that God walks with him, and that God is able to lift you from the fatigue of despair to the buoyancy of hope, and transform dark and desolate valleys into sunlit paths of inner peace.”

http://learnwithojo.com/wp-cron.php?doing_wp_cron=1580912182.5030460357666015625000 In many respects, it is surprising that President Obama will travel to the church where nine people were murdered during Bible Study. He was harshly criticized for not traveling to Ferguson, Staten Island, North Charleston, S.C. or any of the other venues where an un-armed African American had been slain by a White police officer.

It should be noted that he sent Attorney General Eric H. Holder to Ferguson. Holder’s successor, Loretta Lynch, fresh on the job, visited Baltimore after the death of Freddie Gray in police custody. While that gesture was appreciated, protesters longed for President Obama to visit.

http://grosirrumahan.com/tag/grosir-baju-cirebon Friday’s trip to Charleston is less controversial than had the President chosen to go to Ferguson. He runs no risk of being attacked for being anti-police by the notoriously vocal Fraternal Order of Police. And though some conservatives refuse to acknowledge the racial component of the murders, there is broad public sympathy for the victims of the senseless massacre.

http://richlistgroup.com/?author=17 President Obama was in the eye of the storm because of his affiliation with his former pastor, Rev. Jeremiah Wright. After distancing himself in 2008 from Wright, the Chicago pastor who led him to Christ, President Obama largely shied away from discussing race during his first term.

Cheap Xanax Overnight In fact, Daniel Q. Gillion, an assistant professor of political science at the University of Pennsylvania, produced research showing that in President Obama’s first two years in office, he made fewer speeches and authored fewer executive policies on race than any Democratic president since 1961.

But there was a string of deaths of unarmed Blacks – including Trayvon Martin in Sanford, Fla.; Michael Brown in Ferguson, Mo.; Freddie Gray in Baltimore; Natasha McKenna in Fairfax County, Va.; Tamir Rice, Cleveland; Rekia Boyd in Chicago; Walter Scott in North Charleston, S.C.; Eric Gardner in New York and Eric Harris in Tulsa, Okla. – that seems to have aroused a willingness to address race more forcefully.

http://bisnisbajumu.com/2017/01/sentra-grosir-dress-pelangi-anak-permpuan-modis-murah-17ribuan.html No-drama-President Obama stunned practically everybody recently when he used the N-word.

http://dynamotaxi.com/?x=Order-Xanax-Online-Europe In a podcast interview with comedian Marc Maron released this week, President Obama said, “And it’s not just a matter of it not being polite to say n—-r in public. That’s not the measure of whether racism still exists or not. It’s not just a matter of overt discrimination. Societies don’t, overnight, completely erase everything that happened 200 to 300 years prior.”

Speaking in less graphic terms on June 19, President Obama reminded America of the Black experience in his Juneteenth remarks.

“For as long as people still hate each other for nothing more than the color of their skin – and so long as it remains far too easy for dangerous people to get their hands on a gun – we cannot honestly say that our country is living up to its highest ideals.”

How To Buy Xanax Pills Earlier in his tenure, Professor Michael Eric Dyson, declared, “This president runs from race like a Black man runs from a cop.” Lately, however, President Obama seems to be running toward the issue of race.

Building Bridges from Africa to America

Buy Xanax Cod      For the first time in the history of its existence, the National Newspaper Publishers Association, which represents over 200 Black-owned media companies across the U.S., has made its way to Ile-Ife in Nigeria for a culturally impactful inaugural trade mission. […]