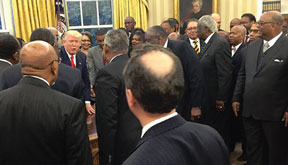 HBCU presidents request $25 billion in aid from The White House

HBCU presidents request $25 billion in aid from The White House

President Donald Trump meets with the presidents and chancellors from the nation’s Historically Black Colleges and Universities. (Lauren Victoria Burke/NNPA)

Although HBCUs comprise just three percent of higher education institutions in the U.S., “HBCUs contributed 19 percent of the nearly 9 percent of all bachelor’s degrees in science and engineering awarded to Blacks in 2010,” according to American Institutes for Research (AIR).

During the Obama Administration, the late Dr. George Cooper headed the White House Initiative on Historically Black Colleges and Universities. Cooper was seceded by Dr. Ivory Toldson, who left the post in June 2016 to lead the Quality Education for Minorities (QEM), a non-profit group in Washing-ton, D.C.

A February 27 photo-op with President Trump in the Oval Office and group “listening session” meeting with Vice President Michael Pence with over 60 HBCU presidents was the first meeting of its kind with HBCU presidents and chanellors in at least eight years.

HBCU presidents, who are in Washington, D.C., this week, also have decided to request $25 billion from the Trump Administration to assist their schools.

At a HBCU president’s reception on Monday night, Grambling President Rick Gallot told the NNPA Newswire that the priorities of HBCUs are “spending on campus infrastructure and an increase in year around Pell Grants.”

The senior White House Official added that the administration wants HBCUs to serve as partners in the President’s urban agenda and that the ad-ministration also wants to increase the private sector’s role in supporting and strengthening their participation in federal programs.

HBCUs did not fare well during the Obama Administration. In 2009, the Obama Ad-ministration failed to renew a two-year appropriation for HBCUs of $85 million a year. The money would later have to be restored by concerned Democrats who controlled Congress.

HBCUs collectively lost over $300 million in grants and tuition after a bureaucratic level decision in 2011 enacted in Obama’s Department of Education made obtaining Parent PLUS loans much more difficult. As a result, 28,000 HBCU students were negatively impacted.

In September 2013, President Barack Obama’s Education Secretary Arne Duncan apologized to HBCU leaders and advocates for the Parent PLUS loan decision. In 2012, Duncan proposed an end to a three-year implementation of summer Pell Grants.

In 2015, President Obama proposed two years of free com-munity college without consulting HBCU advocates. Many of those advocates viewed the proposal as a threat to HBCUs. The proposal, which was never enacted by a Republican-controlled Congress, was later changed to include HBCUs.

In early 2015, during a meeting with members of the Congressional Black Caucus, President Obama expressed what many members later told the NNPA Newswire was a lack of support for HBCUs.  President Obama was critical of HBCU graduation rates and loan policies.

In February 2015, President Obama’s own HBCU Board of Advisors Chair, Hampton University President Dr. William Harvey, was critical of the Obama Administration.

“We are not consulted when it comes to policy changes and decisions impacting – in a major way – the institutions on whose behalf we are to advocate,” said Harvey. “It happened with Pell.  It happened with Parent PLUS. And, now it is happening with the new community college initiative.”

Regarding their visit to the White House on Monday, that included seeing President Trump and Vice President Pence, many HBCU presidents said they were happy to see HBCUs receiving attention within the first 100 days of Trump’s presidency, but they were cautiously optimistic.

“There was very little listening to HBCU presidents today. We were only given about two minutes each, and that was cut to one minute, so only about seven of maybe 15 or so speakers were given an opportunity today,” wrote Dillard President Walter Kimbrough detailed in a column posted on Medium on the night of February 27.

The HBCU presidents convened at the Library of Congress on Feb. 28, 2-1    an all day session with members of Congress.