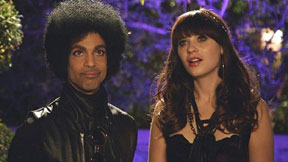 Singers team with L.A. Reid and Epic Records for FALLINLOVE2NITE

Prince’s post-Super Bowl performane on the hit Fox series New Girl has become an official digital release featuring the show’s star, Zooey Deschanel. The single, “FALLINLOVE2NITE,” was written into the script as a duet, marking the episode where Deschanel’s character, Jessica Day, and her co-star Jake Johnson (who plays Nick Miller) exchange I love you’s for the first time. The Purple One makes a guest appearance as himself, naturally, and coaches Jessica Day as she works up her nerve to declare her feelings. He also gives her a makeover with an outfit from his personal closet.

The comedy’s original telecast brought in 25.8 million viewers, the highest ratings for a scripted program on network TV in the past few years, reports Billboard. Prince and Deschanel recorded a full-length version for the release, and though it was written, in a way, for laughs, Deschanel is actually a serious musician.

The L.A.-born actress is also a singer-songwriter who’s recorded several albums and toured as one-half of the indie-pop duo She & Him. The single is now available via all major digital retailers and is being pushed to radio by Epic Records’ promotion team. This is the first time Prince and L.A. Reid (Chairman/CEO of Epic) have collaborated.