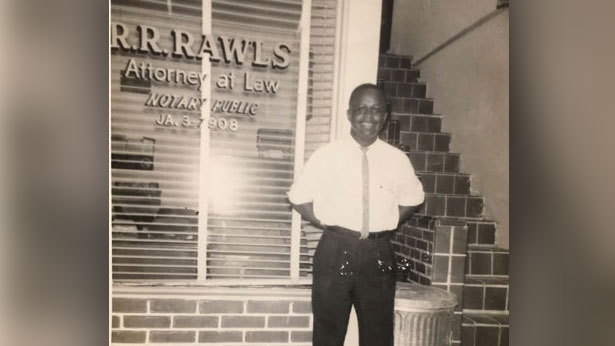 Nestled along the Sistrunk corridor and Samuel Meredith Moseley Boulevard, the African American Research Library and Cultural Center provided the perfect backdrop, for the memorial ceremony in tribute to the late Attorney Raleigh Richard Rawls.

An array of family, friends, and local dignitaries representing the community he served for over 60 years came from far and near in an outpouring display of admiration, on Saturday January 27, 2018, to pay their last respects. Although Rawls had a gentle demeanor and small frame he never wavered in his quest to for equal justice for those he represented in a court of law. Rawls spent his entire professional career protecting the legal rights of thousands upon thousands of clients from his small law office located on Sixth Street, now formerly known as Sistrunk Boulevard.

During his eulogy The Reverend Dr. Simon Osunlana pastor of St. John United Methodist Church stated that he believed that there were three types of people in the world; those who lived just to survive, those who lived to be successful, and those such as Rawls whose lived lives that proved significant. Rawls not only had a successful life both personally and professional by any standard measure. He had a tremendous impact on the lives many people in his community, according to Reverend Osunlana.

U.S. Congressman Alcee Hastings expressed his personal sentiments regarding his colleague, also shared by many of those in attendance who also practiced law. Hastings reminisced about meeting Rawls shortly after he arrived in Fort Lauderdale to begin his law practice. At the time there had been three Black attorneys which preceded Hastings. The first was Theodore J. Reddick, the second was Raleigh Rawls, the third was W. George Allen, and Hastings was the forth.

“Raleigh was a gentleman and a scholar. He was the second African American attorney here in this town. But he wasn’t born and raised in this town. He looked out for all of us. I would best describe him as a soft soul. I don’t ever recall seeing him angry. I don’t ever recall seeing him disturbed or disappointed to the extent that so many of us felt the pains of segregation. But, a homegrown hero is what he was. He’ll be sorely missed,” Hastings recalled.

Rawls was a member of many civic, professional, and social organizations including Alpha Phi Alpha Fraternity, Inc. as a charter member of Zeta Alpha Lambda, the graduate chapter in Fort Lauderdale. Judge Michael Robinson knew him as a fellow fraternity brother as well as a mentor during his career as a young attorney.

“Raleigh was not only a trailblazer but he is one of the few heroes that I’ve had in the legal profession and in our fraternity Alpha Phi Alpha Fraternity. For years he would just sit down with me and talk to me about the history of Broward County, his own personal history, and what he endured here in Broward County through the civil rights era as well as what he had to endure at Howard University, “said  Judge Robinson.

Derrick Butler is the president of Zeta Alpha Lambda Chapter of Alpha Phi Alpha Fraternity, Inc. in Fort Lauderdale. He shared his sentiment on what Rawls meant to his fraternity.

Thomas Walker, Jr., Rawls godson was the Master of Ceremony at the memorial in attendance also was his nephew Willie Rawls, Jr. who captured what he considered the essence of who his late uncle was and what he represented.

“He is a superstar- alley cat. And he also is, notice I’m speaking in the present tense; a renaissance man.”

Rawls originally hailed from Booker, Florida where he was born on June 12, 1925, one of four siblings including Willie, Mary, and Dorothy, born to his father Phil Rawls and his mother Temple.  His father died when Raleigh was merely seven years old, which prompted his mother to move to Fort Lauderdale where she raised her family.

Rawls attended Dillard High School which taught students 1st-12th grade. Under the tutelage of the school principal Clarence C. Walker, Rawls excelled in the classroom and on the football field as a 125 lb. running back. Rawls’ experiences at Dillard proved to be a pivotal moment in his life, one in which Walker assumed the role as a positive male role model in the young scholar-athlete’s life.

In a previous article taken from the Westside Gazette Newspaper Rawls alluded to the significant role Principal Walker played in his life.

Attorney Raleigh Rawls was a graduate of Dillard’s “Class of 1944.” He recalled one of the school’s first principals, Clarence C. Walker, who was at Dillard from 1930 until the time of his death in 1942.

“One of the things I really believed throughout my whole career was that Clarence C. Walker was one of the greatest persons I had ever known. He dedicated his life so that little Black children would get an education. He is the one who was instrumental in us having a Dillard High School. He convinced the Stranahan to donate the land that the school was built on. He said, “If we don’t get that land they’ll have apartments built on it. The land should belong to Dillard High School. This man in my opinion was one of the greatest high school principals that I have ever seen in my lifetime.”

Rawls life was filled with a plethora of distinguished accomplishments not the least of which included serving his country in the United States Navy, graduate of Howard University where he received both his bachelor’s and law degrees. He returned home to Fort Lauderdale to practice law for six decades in the same predominantly African American community of his youth. He was a founding member of several organizations: The T.J. Reddick Bar Association, L.A. Lee Branch YMCA, Old Dillard Museum Board Member, The Urban League of Broward County, Zeta Alpha Lambda Chapter of Alpha Phi Alpha Fraternity, Inc., and the Sistrunk Historical Society.