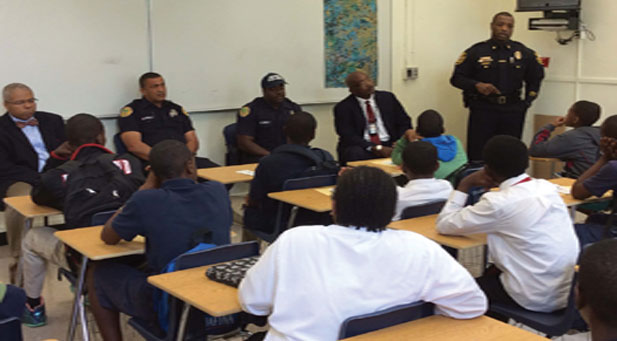 Commander Timothy Belcher (standing) with the other panelists.

Both Atlanta and Miami chapters of the NBPA held these discussions in recognition of the two year anniversary of the shooting death of unarmed teen Trayvon Martin.

In Miami, Miami Central High School hosted the NBPA panel for 75 male students of color on Feb. 28; the panel moved to Ponce de Leon Middle School in Miami. Sixty  students of color, many from the Coconut Grove area, engaged in small group discussions on the topics of Crime, Consequences, and Options.

Jeff Green of the FBI, talked about being raised as one of five children with a single mother. He told the boys “Life is about good choices. We want you to be up here one day sharing with others one day”.

Commander Timothy Belcher of the North Miami Police Department, and sector Vice President of the Miami chapter of the National Organization of Black Law Enforcement Executives (NOBLE), said “We grew up in the same situations…but we made sure that whoever raised us can brag about us”.

Officers Smith and Lanier from the City of Miami Police Department shared the uphill battles they faced in growing up, and how they found success.

The Options Panel included inspirational speakers such as Pastor Chambers, who told the boys that if confronted with a situation that could escalate, “It’s better to walk away and people say ‘there he went’ than look down on the ground and say ‘he was a good old soul’.” The Options Panel tackled topics of bullying, current affairs, and the realities of jail. Dr. Rick Holton informed the boys “jail is hell”. Pastor Hamilton implored the boys to “use what God gave you but don’t mess it up making the wrong choices.”

The panel was rounded off by Christopher Hudson, and FIU Black Law Students Association President Jimmy Paul. Pastor Chambers ended with the analogy of an orchestra conductor, saying “If you are a leader, you have to be willing to turn your back on the crowd.”

The Consequences Panel featured 11th Judicial Circuit Judge Rodney Smith Assistant State Attorney Andrew Ed-wards, Assistant US Attorney Maurice Johnson, Assistant Public Defender Tony Perkins, and Rayvon Richards, a survivor of gun violence. The panel encouraged the young men to think about the consequences of their actions, and what the repercussions can be of being in the criminal justice system.

Rayvon Richards told his powerful testimony of losing his vision at 17 after being shot in the head. In spite of his disability, he went to college, receiving a degree in sociology. He reminded the boys that “you need to be responsible for your actions.”

Federal prosecutor Maurice Johnson took a different tactic, by informing the boys of the realities of going to prison. “Think about your parents. I see mothers crying in court for their kids. You think your mother wants to see you in jail?” Tony Perkins, a public defender, reinforced the same point. “Just because you are a juvenile doesn’t mean you will get away with it. You will get arrested”, he said.

The event was an over-whelming success, and will be repeated in three more Miami schools throughout the next few weeks. The schools include Norland and Madison.

Middle schools on April 4, and Carol City High School on April 11. This program is critical to bringing encouragement to young men that are often labeled and forgotten.

Melba Pearson is an attorney in Florida. Follow her on Twitter at @ResLegalDiva. She is also the Southeast Regional Director for the National Black Prosecutors Association. For more information about NBPA go to www.blackprosecutors.org.