Diversity and inclusion has been two of the biggest topics in several areas. The city of Lauderhill is taking major strides to make sure they are connecting generations and breaking stereotypes by launching their Autism Sa-fety Awareness Program. There is also an organization that is bringing awareness to Autism, but with fashion. Thanks to dedicated parent and com-munity leader Connie Moss, Real World Models was born. I had the chance to catch up with the founder after her daughter Julianna’s birthday party.

Deon: Tell us a little about Real World Models and how you all got started?

Connie: Real Word Models is my brainchild. It’s all from me, it’s my passion.  I am the President. 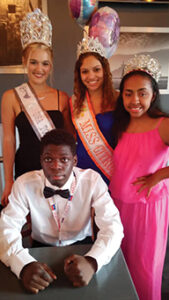 So basically, I found myself dealing with a situation. Julianna had just finished school, so I was basically trying to figure out what her future would look like. In her case, she is non verbal. She cannot really read, and she is not good with numbers. I found myself in deep prayer. I was pretty much asking for the lord to direct me because Julianna is an adult now. I did realize that Julianna’s birthday was coming up, so we planned some activities. We also planned her first  photoshoot. Well, when the images came back, they looked amazing. In fact, everybody I showed the images to were blown away. It’s almost like I was receiving a message from god. I felt him telling me that my daughter cannot do this or that, but she is beautiful and I have a plan for her. So, I took those images and ran with them. I went to my pastor on women’s Sunday and took Julianna to get blessed. I feel like I was led to start Real World Models. I started to think to myself, Julianna will be the future and she will pave the way. She will be the face of Autism.

Deon: Wow, that’s a cool story. So, what happened after you had the vision?

Connie: I spoke to Com–missioner Martin about the idea. I told him that Julianna can be a model. Told him I wanted to start Real World Models for “real models”. He was totally on board with the idea. He said, “Connie, that’s a great idea, and I’m going to endorse you”. He also spoke to the Lauderhill Police Department about an Autism Awareness Safety Program and Julianna can be the poster person for that. So on April 26th, Commissioner Ray Martin and the Mayor of Broward County presented proclamations that commemorated that April 26th, 2021 will be declared as Julianna Calderon Day. She also was recognized as the first ever non-verbal Autism model of Broward County.

Deon: Ok, so tell us about some of the services that you all provide.

Connie: In the future, we plan to be Real World Models and Talent. Our population has talent that is overlooked. Some people cannot see past the disability. I’ve meet young adults on the spectrum that can play instruments really well. We just want to let them know that “we see you”. We want parents to tell us about their children and their talents. There has to be a market for them. Currently, there are several companies that are riding the wave of “Autism is cool”, and we are going to lead that wave. It will be a national resource for people looking for talent in the autism spectrum. Special needs people have been overlooked for so long, we hope to change that. We also want to offer some type of support system for our parents.

Deon: Tell me more about some of the events that have happened in the past?

Connie: Juliana has been a volunteer model in the past., which is where she got the love for modeling.  Real World Models are fairly new. We had an event get cancelled due to Covid-19. Her birthday party was technically the first event.

Deon: Ok, so that leads me to my next question. How was the party? Tell our readers all about what went down.

Connie: So, Julianna now understands the word “photoshoot”. So when we got up in the morning, I told her we had a photoshoot to get her in the mood. The party was at Illegal Pizza in Lauderhill. Everyone was interviewed upon arrival. Y2K Productions did all the filming of the interviews, so special thank you to them. Julianna had so many people stop by for her birthday. People like Lauderhill Mayor Kenneth Thurston, Captain Renee Peterson of the Broward County Sheriff’s Office, Ciara Bolsnik an Autism Awareness Representative, and Yulisa Martin the wife of Commissioner Ray Martin came by, some even had gifts for Julianna. The atmosphere had lots of cameras flashing, some of the models showed up as well. The food was amazing and guest received a 20% discount for their entire meal. 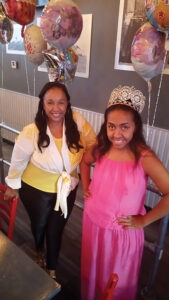 Deon: Sounds like you all had a good time. I see that you all have another event this month. Its on the 31st, so tell our readers more about it.

Connie: We are having a Halloween Party and fundraiser for those that want to participate. Its also the last call for model sign ups. Its going to be at “Nailed It” DIY Studios in Lauderhill, (another Black owned business) Its another opportunity for models to get social and runway practice. Costumes are optional. The fundraiser will be used to help fund the fashion show.

Deon: Alright, now tell our viewers a little about the fashion show and what to expect.

Connie: We are so excited for this show. Right now, we have twenty models and possibly more. We are looking to have it at the Chateau Mar. Our goal is to make it an annual event, and to make it beautiful. The parents and models will get a tour of The Chateau Mar, along with a poolside photoshoot. Our first awardee for the evening will be Commissioner Ray Martin for spearheading the Autism Awareness Safety Program.  The second awardee is Keith Martin from Garza Fat Camp. President Stacey Hoagland from the Autism Society of Florida will be the keynote speaker! SMG Management will be handling the designers and event details for the show.

Deon: Where would you like to see this organization in the next five years

Connie: In the next five years I plan for us to be a national resource for up and coming special needs adults and their families. We want to provide them with opportunities, jobs, and advertising opportunities. We’d like to be looked at as an agency.

Deon: What advice would you give to parents that may be struggling to find a creative outlet for their child?

Connie: A parent has to maintain their own mental state. I’ve had some breakdowns myself. I try to make a conscious effort to meditate at night. It helps me stay focus. As parents, We have to actively seek opportunities to calm ourselves down. Any type of exercise is always good. There’s nothing wrong with taking your child outside. Take them for a walk or take them to the pool. Some of them cannot talk, so its our responsibility to figure it out. We have to not fall victim to the pressure that is put on us to keep our children separate and apart because of fear.