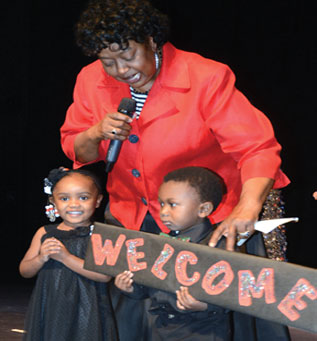 Opening with its traditional Candlelight Procession to the Temptations’ Silent Night parents and family were welcomed by Treasure Henry and Malike Lee..

Produced and emceed by Red School House Director Ms. Gwendolyn Shaw who, along with Red School House alumni Rev. Eddie Harmon, prayed over the group. “You know we always open with prayer,” said Ms. Gwen. “They took prayer out of school but not out of Red School. We have devotion every morning at 8:30 a.m. You parents get there early to get in on the prayer.”

A fully costumed show, Miss LaShondra Williams’ Pre-school class recited an acrostic poem spelling the word Christmas. “H” by Camille Griffin and “T” by Te’a Connor went well but when Kasai Jackson’s stage fright overwhelmed him he began to cry and instead of his letter “I” he hollered “Jesus!” Zacari Fatwa’s letter “S” was very clear as he recited, “S is for the shepherd who watches over his sheep.”

Kha’ Maya Kelly’s “Isn’t This True” conveyed every child’s sentiment. “I like to give presents and I like to get them, too. Isn’t This True?” she said. The pre-school class finale “This Christmas” by Chris Brown was played by Mr. Fashaw with back up dancers Kha’Maya Kelly, Treasure Henry, Camille Griffin, Jada Henry and Te’a Connor wearing a grey and silver tiered dress with a dainty bow at the side of the neckline over chic silver stockings.

Santa Clause is Coming to Town by the Jackson Five performed by Markice Wither-spoon Jr., Xavier Henry, Jr., Quincent Lewis and Khalil Petit-Frere was one of the high-lighted songs from teacher Shana Wright’s pre-school class. The guys were all dressed in black with each wearing sparkling matching red, green or white suspenders and ties but the crowd went wild when Preston Lipsey with dark shades was escorted out to his piano as Stevie Wonder in the class finale when they performed What Christmas Means to Me.

Ziyonnah Alexandre recited a portion of Mahalia Jackson’s What Can I Give in her rendition of “The Gift” “What can I give Him?” she asks. “I’ll give my heart.” Ms. Shana’s girls were costumed in a red empire waist princess dress with red sparkles adorning the hem.

Diane McLeod who has worked with director Shaw for 33 years at the Red School House group of four year olds each had poems they recited including Kaveon Abner while holding a Westside Gazette newspaper recited his “Good News” “Good News, Good News. Tell everyone Christ is born.” Ms. Diane’s boys wore white shirts, red silk ties and top hats while her girls shimmered in skirts of red or cream and ruffled jackets over star burst shirts.

When Lyric Lallemand, whose being raised by her father, was asked how she remembers all her dance moves and her closing speech she pointed to her forehead and said, “I remember with my mind.”

The children began practicing in October. Teacher LaShondra Williams says he assigned the parts according to her student’s personality. Grandparent Carma Lynn Henry who has a three-year-old and five-year-old grand-children whom she worked with to help them learn their parts. “I would ask them randomly while they were doing something else to recite their parts for me. I would do it about five or seven times a day. During the last two weeks I increased it.”

Red School House was founded by Ms. Shaw’s mother Julia Shaw when she was 11 years old. The family moved to a new home and renovated their old home into a school house. Caring for children from newborns to five year olds during school and the after school program for children of any age.

Operating from her mother’s vision, “We care about your children.” Shaw takes pride her schools educational thrust. “In any community someone has to watch your children,” she says.”Parents have to work, especially in our community and we want to be there helping them and providing a safe, nurturing, cultural and academic atmosphere for their children.

“Consistency gives security. We have teachers who have been with us for 30 years. We don’t have a high turnover of teachers. We do the same drill every day and it shows. We like to say the children have two personalities, the ones they have with their parents and the ones they have at school. They are pure and innocent and they feed off whatever spirit is present. When they are with us they are well behaved and they listen.”

Back stage after the show speaking with a group of Red School House students we asked what kinds of stars they would be. Kha’ Maya Kelly  said “I’m a big girl star.”, Camille Griffin said “I’m a Minnie Mouse star., Juanita Reese who wants to be a “Frozen star” asked If I liked her dress and shoes, yes they were beautiful.  Al’leah Johnson was more specific. “I want to be an Elsa star.”

Mobilizing for the Oct. 10 ‘Justice Or Else’ March in D.C.