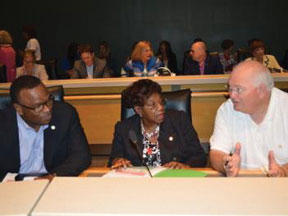 Rep. Clarke-Reed, who is also the Vice Chair of the Broward Legislative Delegation, is working diligently with her Broward counterparts and other members and staff.

TALLAHASSEE, FL — After a week of long, detailed and passionate floor debate on expanding health care for Floridians, State Representative Gwyndolen “Gwyn” Clarke-Reed worked through the weekend as an at-large budget conferee.

House and Senate members negotiated through the weekend to resolve differences between the two chambers and Representative Clarke-Reed, D-Deerfield Beach, as an at-large member, took part in many of those discussions. She is intent on quickly and efficiently completing the work the citizens expect lawmakers to complete. Differences between Republican leaders resulted in an early end to regular session and the need for this special session.

The people are counting on us to do the work required of us and to do so quickly. Rep. Clarke-Reed is committed to doing her part.

Rep. Clarke-Reed, who is also the Vice Chair of the Bro-ward Legislative Delegation, is working diligently with her Broward counterparts and other members and staff, to make sure that Broward County is not left out of this year’s state budget.

Special Session began on June 1 and is scheduled to continue through June 20. Legislators must produce a balanced budget in areas of Education, Health Care, Justice, Transportation and Economic Development, Agriculture and Natural Resources, and Government Operations

Rep. Gwyndolen “Gwyn” Clarke-Reed is pleased to announce that the Florida Legislature has awarded $995,000 to the City of Deerfield Beach, Fla. to purchase and preserve a parcel of land that served as an African American cemetery during the segregation era. […]