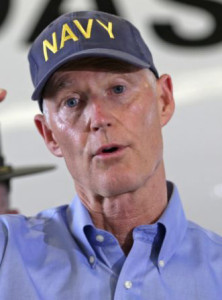 FORT LAUDERDALE, FL – In response to revelations that Governor Rick Scott ignored numerous calls for help and deleted multiple voicemails from a South Florida nursing home where eleven patients died in the aftermath of Hurricane Irma, For Florida’s Future issued the following statement:

“While Governor Scott was ignoring emergency post-Irma calls from a nursing home, 11 seniors lost their lives. And if Scott’s lack of urgency were not enough, his record of weakening protections in the nursing home industry may be shown to have had deadly consequences. What Florida needs from its Governor now is a serious effort to prevent a similar tragedy in the future. That means taking responsibility, being fully transparent with investigators on how and why this happened, and figuring out what new oversight and protections need to be put in place right away for our most vulnerable citizens under nursing care,” said Blake Williams, Communications Director with For Florida’s Future. “When Floridians call for help, we need a governor who will pick up the phone. There is no more important responsibility for a Governor than protecting citizens, and Rick Scott failed these senior citizens and their families.”