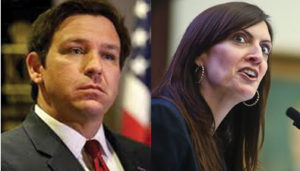 WASHINGTON, D.C. — In his latest column for HuffPost, America’s Voice Communications Manager and DACA-recipient Juan Escalante calls Ron DeSantis’ decision to pick Jeanette Nuñez as his number two in the Florida gubernatorial race “a favorite and familiar tactic of Republicans to deceive voters on the cruelty of their agenda and distract them from their extremist positions.”

This tactic ― putting a Latino candidate on the ticket ― is a favorite and familiar tactic of Republicans to deceive voters on the cruelty of their agenda and distract them from their extremist positions.

Nuñez is a Cuban-American and Miami native who has served eight years in the Florida House of Representatives. Throughout her time in public service as a state legislator, Nuñez, a Republican, has repeatedly been a reasonable voice among the extremists of her party. She consistently stood up to her colleagues whenever attempts to pass legislation targeting immigrant communities came before the state house, and her thorough understanding of how Florida’s diverse population contributes to the state’s economy has earned her a rapport with immigration advocates.

One of Nuñez’s most significant accomplishments, however, took place in 2014 ― when she spearheaded a bill that would grant in-state tuition to Dreamers who met specific criteria and enrolled at a state college or university. Her bill earned Nuñez praise from Scott and then-House Speaker Will Weatherford, who congratulated her on her leadership role in securing the legislation’s passage. I know this because I was in the crowd when Nuñez was recognized by Scott the day he signed her bill into law back in 2014. (I too was personally recognized by Scott.)

So why, and how, has Nuñez gone from an ally of immigrant and Latino communities to a lieutenant governor candidate on an unapologetically Trump-endorsed ticket?

It’s quite simple, actually: Her party needs someone to defend DeSantis’ racism and sell his Trump-inspired policies in Spanish. How else could anyone expect Latinos and immigrants to consider electing a man who has promised to bring Trump’s anti-immigrant agenda to one of the nation’s most diverse states?

By picking Nuñez as his No. 2, DeSantis is hoping to dilute his image as a Trump enabler and loyalist and instead appear as a reasonable and sensible candidate to minority voters in Florida counties like Broward and Miami-Dade.

DeSantis is so close to Trump that it’s unfortunately easy to see that his decision to recruit Nuñez is nothing more than another sad attempt by the Republican Party to cajole Latinos. After all, Nuñez is now the first Cuban-American woman to be chosen as a lieutenant governor candidate in Florida. But even this cannot mask the fact that, if elected governor, DeSantis would take the state of Florida as far right as he and his Trump-loving supporters want.

For her part, Nuñez has wasted no time attacking Gillum and Democrats, calling them “socialists” at campaign rallies with DeSantis ― a misaligned attack line that might get the ears and eyes of a portion of South Florida’s Venezuelan and Cuban communities. But there’s really no way for her to defend the far-right comments and behavior DeSantis has exhibited over the years.

Florida deserves a governor who embraces the state’s dynamic culture and growing diversity ― not another soldier in Trump’s army of deplorable cronies. Latinos, immigrants and other minorities must start cross-referencing what Republican candidates say in Spanish and English, because chances are their cruelty and the xenophobic portions of their agenda will be lost in translation.