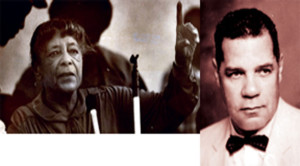 FORT LAUDERDALE, FL — For the first time in the state of Florida’s 171-year history, a state park will be named after African Americans who fought to ensure that Blacks had full access to the state’s beaches.  The Celebration of the  renaming and reclaiming of the John U. Lloyd Beach State Park to the Dr. Von D. Mizell and Eula Johnson State Park Ceremony will be held on Saturday, Aug. 6, 2016 beginning at 2 p.m. with music from HOT 105 FM and local acts. The official program will begin at 4 p.m. in the park. This historic program will provide official designation of the park, presentation to the families of these civil rights pioneers, and an official wade-in commemoration ceremony. Activities for the day will include an onsite Black History Museum Pavilion which will house archives from seven local museums, meet living legends, great music, free food and food trucks, witness the official ceremony.

Visit the Activity pavilions named after key civil rights pioneers, fun activities for children, free access to the beach and participate in the official wade in. Attendees are encouraged to bring their lawn chairs and blankets and become a part of history.

“I look forward to a historic event that will remind attendees of the freedom we share today and remember the past on these beaches. This issue has left a long-standing stain in the history of Florida and I decided it needed to be corrected,” said Sen. Smith. “I spoke with leaders in the community and those who participated in the struggle. They encouraged me to correct history even if it ruffled some feathers. This is a momentous day in our community and we celebrate the Florida House, Florida Senate, and Governor’s Office for recognizing the importance of this overdue historical tribute.”

The John U. Lloyd State Park – a 117-acre tract originally established in 1954 as the “Colored Beach” waterfront park – was named after the Broward County attorney directed to keep the beaches segregated.

Now encompassing 310 acres stretching from Port Everglades Inlet to Dania Beach in the south, the park will be renamed the “Dr. Von D. Mizell -Eula Johnson State Park” in honor of the two pioneers who led the charge, joined by others, to access the beaches in Broward County. Their efforts in turn led to similar beach desegregations throughout the state, allowing everyone who lives, works, travels, and plays here to access Florida’s renowned coastal beaches and parks.

Dr. Von D. Mizell, founding president of the Broward NAACP, and the most note-worthy African American in the civic history of Broward County in the 20th Century, petitioned for the creation of a beach for Negro (Black) citizens in 1946, a time when Blacks were abruptly denied access to the area’s public beaches. Over the next seven years, he kept the pressure on until authorities finally relented and directed Broward County Attorney John U. Lloyd to find a location for the Colored Beach, which he did in 1951. The African-American community led by Dr. Mizell, next asked for a road to be built to access the beach. The county agreed but waited 10 years. On July 4, 1961, Dr. Von D. Mizell drove Eula Mae John-son, Lorraine Mizell, Myrtis Mizell, Edmund Robinson, Chester Sims and Edna Holley to the ocean by way of Las Olas Blvd. They did what had been denied Black people for more than three decades and went to the whites’ only beach and got in the water as Dr. Mizell instructed them to do. They endured racial epithets and were spat upon by white bathers. They stood their ground.

Eula Johnson then organized seven carloads of young people three weeks later to follow up and once more headed to the whites only beach. She was threatened by the Ku Klux Klan and offered a bribe by the publisher of the Fort Lauderdale News to refrain but refused it. They did not give up.

In the end, the City of Fort Lauderdale sued the NAACP for inciting chaos and being a public nuisance. But in 1963 a federal judge ruled in the NAACP’s favor, and against the city’s segregated public accommodations policy in saying that Black residents had a right to swim wherever they please. In 1970, the Colored Beach became John U. Lloyd State Park.

The park boat ramp will be named as the “Alphonso Giles Boat Ramp” in honor of Alphonso Giles who ferried African-American residents to the beach in the days of segregation. The only way residents could get to the “Colored Beach” was by boat. When the ferry was delayed, Mr. Giles used his boat to ferry Black residents to the beach. Mr. Giles and his boating club, the Jolly Anglers, successfully petitioned the City to build a dock for Black residents who owned boats to use at the park. Giles was the first Black member of the Broward County Marine Advisory Board.

The “Leatherback Pavilion” will now be known as the “W. George Allen Leatherback 22 Pavilion” in honor of Attorney George Allen, the first African-American to graduate from the University of Florida Law School who, as a young attorney, filed the law suits that led to the integration of the Bro-ward County public schools and the Broward County’s public accommodations.

The Marina pavilion is now named the Dr. Calvin Shirley Marina Pavilion because of his efforts in the civil rights struggle. Along with the three other Black doctors in town, Dr. Shirley sued to be permitted on staff at Broward General Hospital, now called Broward Health Medical Center. In the 1960s, he and his wife helped establish a county Health Department branch in the Sistrunk neighborhood. The pair also developed the curriculum for Broward’s first school for licensed nurses.

The Osprey Pavilion is now named the George and Agnes Burrows Osprey Pavilion be-cause of their efforts in the civil rights and business arena to create opportunities within the community. A child of Bahamian immigrants, Bur-rows was a World War II veteran who attended Bethune-Cook-man College (B-CC) and became a state-licensed master electrician. He went on to fight against a segregated system that limited his services to the Black community in Colored Town, and launched a successful career that spanned five decades.