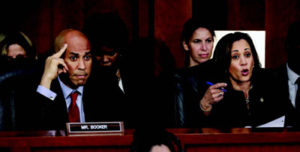 “From 1882 to 1986, Congress failed to pass anti-lynching legislation when it had an opportunity 200 times. Today, by passing this bill we have offered some long overdue justice and recognition to the victims of lynching crimes,” said Senator Harris.

Senators Booker and Harris Speak  on Senate Floor During Passage of Anti-Lynching Bill.

WASHINGTON, D.C. – U.S. Senators Kamala D. Harris (D-CA) and Cory Booker (D-NJ) took to the Senate floor to ask for unanimous consent to pass the bipartisan Justice for Victims of Lynching Act of 2018, historic legislation that would criminalize lynching, attempts to lynch, and conspiracy to lynch for the first time in American history. The motion passed, marking the first time in American history that federal anti-lynching legislation has been passed by the Senate.

“Lynchings were needless and horrendous acts of violence that were motivated by racism. And we must acknowledge that fact, lest we repeat it,” said Senator Harris. “From 1882 to 1986, Congress failed to pass anti-lynching legislation when it had an opportunity 200 times. Today, by passing this bill we have offered some long overdue justice and recognition to the victims of lynching crimes.” “Today is an emotional and historic day.

For over a century, members of Congress have attempted to pass some version of a bill that would recognize lynching for what it is: a bias-motivated act of terror. And for more than a century, and more than 200 attempts, this body has failed. Today, we have righted that wrong and taken corrective action that recognizes this stain on our country’s history,” said Senator Booker. “This bill will not undo the damage, the terror, and the violence that has been already done, nor will it bring back the lives that have been brutally taken. It will not reverse the irrevocable harm that lynching as a tool of oppression and suppression has caused. But it will acknowledge the wrongs in our history. It will honor the memories of those so brutally killed. And it will leave a legacy that future generations can look back on – that on this day, in this time, we did the right thing.”

The Justice for Victims of Lynching Act of 2018 amends the United States Code to specify that lynching is a crime under existing federal civil rights statutes. The legislation was originally introduced in June 2018 by U.S. Senators Kamala D. Harris (D-CA), Cory Booker (D-NJ), and Tim Scott (R-SC), and unanimously passed the Senate Judiciary Committee in October 2018.

Lynching was used as an instrument of terror and intimidation 4,084 times during the late 19th and 20th centuries, according to data from the Equal Justice Initiative.

The Justice for Victims of Lynching Act is supported by the NAACP, the Anti-Defamation League, and the Equal Justice Initiative, and has companion legislation in the House of Representatives.

Rhetoric of race at the crossroads of police reform

Rhetoric of race at the crossroads of police reform
[…]

For Black Girls celebrates the beauty of Black girls and women as they relaunch this month. Ruby L. Taylor, M.S.W., founder of the movement and alumna of Howard University, saw a need to empower young women […]