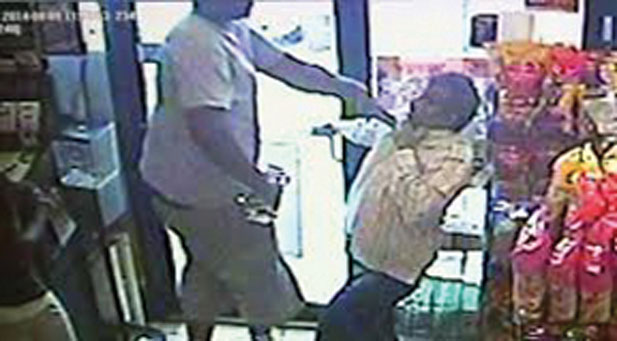 By Sandip Roy Special to the NNPA via New America Media

It is a troubling image. The hazy security camera screen captures from the convenience store reinforced those fears. The store clerk was slightly built. Michael Brown, the customer holding him by the collar was a much larger man. Though the storeowner, Andy Patel, later told the St. Louis Post-Dispatch no shoplifting or robbery had occurred in his store, the screen-grab encapsulated a story of suspicion, tension, and conflict.

Soon thereafter, Michael Brown was gunned down by police in Ferguson.

We have seen this storyline before. With Korean shop-keepers in the 1992 Los Angeles riots, for example. Four white police officers beat up a Black motorist named Rodney King. But, when riots broke out after the verdict, armed Korean shop-keepers were the ones standing guard against looters in front of their stores. Korean-Black tensions were high.

“I think the Black people are jealous of the Koreans,” Carl Rhyu, a member of the community’s security force candidly told the New York Times at the time. “They’re lazy; we are working hard. They’re not making money; we’re making money.” It was a prejudice many had but rarely shared in public.

If any good came out of the horror of Ferguson it was this: It didn’t turn into a Black vs. Brown issue.

Ferguson’s South Asian population is very low but store-owner Mumtaz Lalani tells (India Abroad) that of the 30-50 minority-owned small businesses, at least a dozen are Indian-owned. Lalani’s own store was burned and looted. But he said so were other stores. “So it is not only that our community was targeted,” he said.

“The violence affects an entire community, including all of its citizens,” Anil Gopal, president of the St. Louis Asian Indian Business Association, told India Abroad. “Therefore I would not turn this into an issue about Indian Americans only.”

But, it could easily have become one. Indian storeowners are highly vulnerable. They run small convenience stores in crime-ridden pockets of inner cities and small towns. Miscommunication festers across a language gap. They are an easy target for robberies and violence because they have cash in their registers. Often they do not even report thefts. Sometimes it’s because they think the police will not care beyond filing a cursory report. Sometimes it’s because the clerk himself might not have his immigration papers in order.

“A convenience store clerk, often a Patel or someone of Indian origin, is killed in a robbery every few months some-where in America,” writes Chidanand Rajghatta in Times of India. Though the Ferguson store altercation was not fatal or armed, it can be, writes Rajghatta: “In July this year, Rahul Patel, 26, was shot dead at a family-run liquor store in Montgomery, Alabama in a suspect robbery attempt. In June, Satish Patel, who was working at the Phillips 66 off of Highway 59, just north of Beltway 8 in Humble, Tex., was shot dead by three masked gunmen who stormed inside just before mid-night in yet another robbery attempt.

In December 2013, Lexington police charged an 18-year-old man with murder and robbery in the fatal shooting of store clerk Parag Patel of A&M Beverage, another botched robbery.”

Dr. Martin Luther King, Jr. might have drawn inspiration from Mahatma Gandhi but closer to the ground Indian-Black relations have always been complicated.

“There is no racial conflict between Blacks and Indians or other South Asians,” Lalani told India Abroad. That was probably a bit of wishful thinking. Prejudice and suspicion run on both sides even as there are points of convergence.

In the 1970 census 75 percent of Indian-headed house-holds identified as “white.” Immigrants carry their own racial baggage with them to America. African Americans resented many immigrants and white women for taking fuller advantage of the opportunities afforded to them, thanks to the affirmative action.

“If you’re a newcomer, ‘an outsider’, it’s always been clear that the way to become an American is to join the general prejudice against African Americans,” wrote Hugh B. Price, former president of the National Urban League.

African Americans complained that South Asian cabdrivers in New York routinely refused to take them as passengers. But cab drivers say it’s not about race, it’s about going into far away crime-ridden neighborhoods.

Cab drivers carry cash, like liquor store clerks, making them especially vulnerable, noted CNN. Palash Ghosh wrote in IBTimes “they are caught in a vortex of prejudice in which they are both the victim and perpetrators of racism and discrimination.”

Media, of course, is always more interested in the story about racial conflict where there are sides and tensions and head butting. That is regarded as the unfiltered “reality” while coming together across racial lines is regarded as “NGO-dreaming.”

Sometimes NGOs too go overboard in trying to “brownwash” an event to project an idealistic vision of racial solidarity. Or they rush to embrace the issue with such fervor the real victims get left out of the picture. Deepa Iyer who headed the South Asian Americans Leading Together makes that important point in The Nation.

She points out stories that clearly indicate that, “Latinos, Asian and Arab-Americans are no strangers to police violence and profiling based on skin color, accent, language, immigration status and faith.”

But while calling for different groups to come together to reform discriminatory police practices, Iyer is clear that “African Americans in Ferguson must remain the primary voices and decision-makers calling for action to address the murder of Michael Brown.” Finding common ground with a tragedy and co-opting it are very different things.

Ferguson will not miraculously break down racial barriers and create a multicultural Kumbaya moment. But it drives home a simpler point about race relations in America. Despite all the suspicion and prejudice, in hardscrabble towns and neighborhoods, the chances are the shop-owner could be a Indian or a Korean and the customer could be African American or Latino.

When a group vents its anger it might be ironically against those very stores that serve them because they are the ones on hand. But after the shattered glass is swept from sidewalk, they are still all in it together, for better or for worse. And if anyone rebuilds the neighborhood it will be all of them.

“Can we all get along?” Rodney King had famously and rather helplessly pleaded during the L.A. riots. America is nowhere close to that and King himself is dead. But while he might have despaired at how little has changed when it comes to police and accountability in the 20 years since the L.A. riots, he might have found a glimmer of hope as well in Ferguson.

Anil Gopal, the president of the St. Louis Asian Indian Business Association and a 21-year resident of Ferguson told India Abroad that “a lot of Black people came to help the (Indian) community. They came out in droves to help clean up the neighborhood, and helped the victims clean up their stores. Some of them even kept vigil outside the store as long as they could to protect the stores.”

Perhaps not a great leap in race relations, but in times of great strife when so many things seem to be stuck in old patterns, every small step counts.

Sandip Roy is a writer for First Post where another version of this article first appeared.