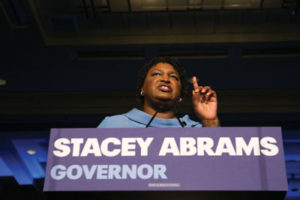 Abrams is still pushing for justice.

Stacey Abrams may have acknowledged that Brian Kemp won the election for governor of Georgia, but she is not giving up on fighting for every vote to be counted. Several law-suits have been filed against Kemp, and now Abrams is reportedly filing another one.

However, Abrams is doing something about it. She explained, “We have started an organization called Fair Fight Georgia. We are going to file a federal lawsuit — next week — that will allege the gross mis-management that we have seen and that we have been able to document.”

She continued, “In fact, we thought we were going to go forward with the case today or this week, but we have gotten so many more — so much more information from voters, so many more calls, that we’re continuing to gather affidavits and we’re going to push it to next week, given the holidays,” Abrams explained.

Kemp allegedly (and more than likely, fraudulently — considering he is legendary for voter suppression) received 50.2 percent of the vote and he would have needed to be under 50 percent for there to be a runoff.

Weeks before the election, former President Jimmy Carter called on Kemp to resign. He refused and waited until two days after the election to offer his resignation, arguably, after his corruption had already been done.

“I’ve just come to the decision that my best value add, the strongest contribution I can give to this primary, would be to make sure our nominee is coming into an environment where there are strong voter protections in place,” Abrams told the Times. […]