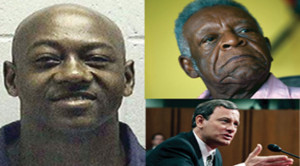 Timothy T. Foster (l); Eddie Hood (top right) speaks during an interview at his home in Rome, Ga., Wednesday, Oct. 28, 2015. Hood was a potential juror in the murder trial of Foster, who was convicted and sentenced to death for the murder of an elderly white woman in 1987. The U.S. Supreme Court will consider whether prosecutors improperly singled out potential Black jurors, including Hood, in notes and then excluded them all from the death penalty trial. (AP Photo/ John Bazemore) Bottom photo: Chief Justice John Roberts.

WASHINGTON, D.C. — In a seven to one decision issued recently, the Supreme Court of the United States held in Foster v. Chapman, No. 14-8349, that Butts County, Ga. prosecutors violated the Equal Protection Clause of the United States Constitution by rejecting two prospective African American jurors because of their race in the capital murder trial of Timothy Foster, an African American man who was convicted of capital murder in 1987 by an all-white jury.

Chief Justice John Roberts’ majority opinion, which was joined by five of his colleagues, cited several pieces of evidence from the prosecutors’ files that supported the Court’s conclusion, including the first five names of a “Definite NO” list of six prospective jurors containing the only five African Americans in the jury pool; multiple documents that identified the African American prospective jurors by their race; and notes with “N” for “no” appearing next to the names of all the African American members of the jury pool.

“The systematic exclusion of African Americans from juries, particularly in serious criminal and capital cases, is a problem that we continue to see today,” stated Kristen Clarke, president and executive director of the Lawyers’ Committee for Civil Rights Under Law (Lawyers’ Committee). “The Lawyers’ Committee is pleased with the Supreme Court’s ruling which affirms the longstanding, fundamental constitutional principle that prospective jurors cannot be rejected because of their race. The evidence in this case was overwhelming that prosecutors were determined to try Mr. Foster, an African American man, before an all-white jury. All defendants are entitled to a fair trial and excluding prospective jurors based on their race taints the process because it means that defendants are not tried by a jury inclusive of their peers.”

About the Lawyers’ Committee

The Lawyers’ Committee for Civil Rights Under Law (Lawyers’ Committee), a non-partisan, nonprofit organization, was formed in 1963 at the request of President John F. Kennedy to involve the private bar in providing legal services to address racial discrimination. Formed over 50 years ago, we continue our quest of “Moving America Toward Justice.” The principal mission of the Lawyers’ Committee is to secure, through the rule of law, equal justice under law, particularly in the areas of fair housing and community development; employment; voting; education; environmental justice; and criminal justice. For more information about the Lawyers’ Committee, visit www.lawyerscommittee.org.

The Supreme Court ruling on ACA a big win for Florida

The Supreme Court ruling on ACA a big win for Florida
[…]

How the Supreme Court could scuttle critical fair housing rule

The U.S. Supreme Court has announced that it will take up a key enforcement tool used to address systemic discrimination under the Fair Housing Act. […]

By BRANDON LARRABEE THE NEWS SERVICE OF FLORIDA THE CAPITAL, TALLAHASSEE, September 11, 2012……….A trial court will decide whether state lawmakers are adequately funding public education after the Florida Supreme Court turned aside a […]