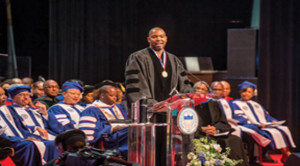 Ta-Nehisi Coates: A view from the literary top

WASHINGTON – The man who has taken the literary and journalism worlds by storm, authored a New York Times best-seller and is the recipient of a more than half million dollar fellowship in recognition of his literary achievements, was sitting down and doing the one thing that really makes him uncomfortable — talking to the media.

“One of the unfortunate things about the past year is that I’ve spent it answering other people’s questions,” said Ta-Nehisi Coates, winner of the National Book Award, national correspondent for The Atlantic magazine and recipient of the prestigious MacArthur Award.

“You just get uncomfortable with it after a while.  You want to go back to asking questions yourself.”

Coates said he is also uncomfortable with being called upon to answer questions about the African-American community, emphasizing he isn’t the “spokesperson” for African Americans.

Coates had just delivered the keynote address at the University’s 149th Charter Day Convocation in which he praised the university for its contributions to his success and to the nation.

“There is no geographic quadrant, no place on the globe, nowhere in this world, that I’ve felt is more beautiful than Howard University,” Coates told more than 1,000 of the university’s students, alumni, faculty, staff and others gathered Friday in Cramton Auditorium.

“I knew that when I was here that I was not just experiencing a present beauty of an institution. I was experiencing the beauty of a heritage, going way, way back.  That put a pressure on me, a kind of responsibility. Beauty is not free.”

Coates, who did not graduate from the university, majored in history and studied at Howard from 1993 to 1999.

During his interview, Coates said he also feels uncomfortable with some of the accolades he receives.

“I’m always uncomfortable with the term ‘intellectual’ or anything like that,” he said. “I got into writing to be a student, and to me, the best part of it was declaring what you wanted to know and following your own path. And I get very nervous about dictating paths to people.”

Still, Coates has some advice for aspiring writers, including getting rid of the notion of “writer’s block.”

“An essential task in writing is to put something on the page, no matter how horrible it is,” he said. “It’s just pushing one word in front of the other, and then getting up the next morning and editing those words and reediting and editing until you get something that is hopefully good.”

He also suggested aspiring writers listen to hip-hop, a genre he frequently mentioned in most recent book, Between the World and Me, as one of his inspirations.

“When I was young, I wanted to be a rapper, and I was terrible at it,” he said. “But the idea that your sentences and the way you write should be musical, it should have some sort of rhythm to it, I think I write out of that tradition.”

“I was just blown away,” he said. “Even though we’re different generationally, the way he describes his relationship with his peers was so familiar. Writers who are not listening to hip-hop are losing. They’re missing something.”

So what is Coates listening to right now? Besides the usual suspects for a self-proclaimed old-school hip-hop fan, including Jay-Z, Outkast, Nas and Wu-Tang Clan, Coates said he’s a huge fan of Rihanna’s new album, “ANTi.”

“I’m not playing nothing but that Rihanna album,” he said. “It’s incredible, because I think so often [artists] have this commercial path and to see her just completely flip it,  I love when artists do that.”

Coates encouraged aspiring writers to avoid writing for popularity or impact, but rather, write for themselves.