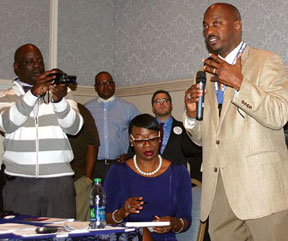 The 34 Annual Conference of the Democratic Black Caucus of Florida

“This is the year for strategic planning with the stakeholders of our community about the importance of legislating and voting,” says Henry Crespo Sr., president of the DBCF. The theme this year is “Speak to Our Issues,” and it is significant and critical, because the candidates seeking our votes must address our issues.

The keynote speaker at the DBCF Conference is the Honorable Mayor of the City of Newark, N.J., Ras Baraka, the son of the late Amiri Baraka, the famous poet, playwright, and political activist. Mayor Baraka was also an activist at Howard University, Principal at Central High School, a leader in America’s New Urban Agenda, and helping to create a resurgence of business in downtown Newark.

Keynote Breakfast speaker, Denise Rolark Barnes, who is the Chairwomen of the National Newspaper and Publishers Association (NNPA), will also inspire the attendees at the conference. After graduating from Howard University Law School, based out of Washington D.C., she took over as publisher of the Washington Informer in 1994.

We are also excited to have special guest and lunch speaker Tommy Ford, actor from the hit series Martin, NY Undercover, and the movie Harlem Nights, and share some entertainment stories and celebrity humor.

There are over 18 plus chapters statewide, and the Democratic Black Caucus of Florida (DBCF), which is Affectionately called the “The Soul of Party” represents over 1.2 Million Black voters registered as Democrats in Florida (app. 30 approximately of the Florida Democratic Party as a whole). The DBCF was established in 1983, formed to unite and increase the political power for Black Democrats who were unnoticed and underserved in the state. The Caucus is an integral part of the Florida Democratic Party’s infrastructure, with the purpose to unite talent with opportunity to facilitate voter building, education and action.

The Democratic Black Caucus of Florida was established in 1983, to unite and increase the political power for Black Democrats who went unnoticed. The Caucus is an integral part of the Florida Democratic Party’s infrastructure, which unites talent with opportunity to facilitate voter building through educational forums effecting voter registration drives (EVRD), get out the vote (GOTV), voter action network (VAN), vote by mail (VBM), and support qualified candidates approved by the Black Caucus.