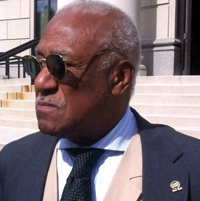 Ernest D. Davis firmly believes that his successor, the city’s current mayor, Richard Thomas, is in it for himself and has done much more harm to Mount Vernon than perhaps anyone whose held that office.

Ernest D. Davis served four of the five allowed terms as the mayor of Mount Vernon, N.Y. With 70,000 mostly African American residents, Mount Vernon sits north just of the Bronx and in the same county as Westchester’s wealthy elite.

For Davis, an architect by trade, the idea of Mount Vernon taking a backseat to any city or town is quite insulting.

For the 80-year-old Davis, the only thing worse than a negative perception of his beloved city, is a constituent believing that anyone sitting in the city mayor’s seat is there simply for political and personal gain and not for the people.

Davis firmly believes that his successor, the city’s current mayor, Richard Thomas, is in it for himself and has done much more harm to Mount Vernon than perhaps anyone whose held that office.

So, after reading an NNPA Newswire article that featured Thomas in December, Davis said he began to contemplate a strategy to help unseat the young mayor.

He envisioned working behind the scenes, not running himself.

“I was trying to get other folks that I believe in to run and for different reasons, they refused,” said Davis, a North Carolina A&T Graduate who, in the 1970s, became Mount Vernon’s first Black building commissioner and later Westchester’s first Black county legislator.

Davis would eventually become Mount Vernon’s second African American mayor when he won election for the first time in 1996 – serving three terms before a defeat to Legislator Clinton Young and then a comeback four years afterwards.

Davis was again was unseated in 2016. This time by Thomas, whom the former mayor now says is ruining the city.

And, as he walked through the streets of his beloved city, Davis said the cries for him to run again began to grow. “Let’s do it again,” people would say.

That coupled with the NNPA Newswire article presented Davis a “Godfather” moment. “Yes, just when I thought I was out, they pull me back in,” he said, paraphrasing the famous line from the Oscar-winning classic.

Like the late Marion Barry in Washington, Davis has a reputation throughout Mount Vernon as “The People’s Mayor.”

He said he’s long been a champion of the citizens of Mount Vernon and points to his prior tenures as reasons why residents just may elect him again.

“These are very turbulent times, the hills are steep, and the road is rocky,” Davis said, with the flare he’s demonstrated since first taking the office more than 20 years ago.

“Thomas is destroying the city. His theatrical performances and lies. If you were writing a play, you’d say, I don’t want to see this play because it’s not real. But it is,” Davis said.

He even compared Thomas – who, like Davis, is a Democrat – to President Donald Trump. “Trump said he’d take responsibility for the shutdown and then he blamed the Democrats,” Davis said. “That’s what Thomas does.”

In his interview with NNPA Newswire, Thomas blamed Davis and “The old guard” for the continued crisis the city faces as Mount Vernon again faces bankruptcy and an almost non-existent bond rating.

Davis said the blame lies at the feet of Thomas.

“I was at church the other day and I heard one of the best sermons – ‘What happens when the family falls out?’” Davis explained. “What I was left with is that it’s about purpose over position. These people who want the power but don’t know what to do with that power … sometimes it’s misused and in the case of Thomas, it’s a mixture of greed, emotional immaturity and no experience,” Davis said.

Davis pointed to an incident in January in which students at Mount Vernon were taking midterm examinations and, unannounced, Thomas made a surprise and unapproved visit to the school with comedian and rapper Fatboy SSE.

Fatboy began “making it rain” by tossing money around the school, reportedly causing a mad dash to grab the cash and leaving classes in chaos.

School officials said as many as 400 students were involved in a melee that resulted in seven suspensions and one arrest for assaulting a security officer.

The school suffered extensive damages and officials said they plan to launch legal action against Fatboy and the mayor. “I think it shows his incompetence,” Davis said of Thomas. “I don’t think anyone thought he’d be the catastrophe that he is. I had no idea,” Davis said.

As was once true of Davis (in 2014), Thomas is currently facing federal corruption charges leading three other Democrats to announce intentions to unseat him. Thomas was indicted last year for alleged misuse of campaign funds and for allegedly using city funds for personal legal bills.

A trial date hasn’t been set.

In 2014, Davis pleaded guilty to two counts of tax evasion charges in which he failed to file an income tax return despite earning more than $100,000 in income.

He was sentenced to probation.

“I know [the media] will bring up some things, but I’m most proud of what we’re going to do,” Davis said.

Asked about the highlights of his tenures as mayor, Davis pointed out that each time he left office, the city had millions of dollars in surpluses, only to see it become a deficit after his departure.

He mentioned the city’s annual “Arts on Third Street” celebration that attracted about 4,000 people when he founded the event.

The city’s parks, once a haven for unseemly activity, have turned into an oasis where children and adults alike can play and relax. Davis said the city’s history must be respected.

“We will refurbish Betty Shabazz’s house, the (city founder) John Steven’s house and put to good use the facilities at the old YMCA,” Davis said.

He still wants to bring a major hotel chain into Mount Vernon and an artist loft.

Davis said his plans include fixing sidewalks by using grant money instead of taxpayer funds and to appoint a liaison to work with downtown businesses and City Hall.

“We have to get back to trying to bring service, especially to our young citizens,” Davis said. “We talk about hiring more police, but wouldn’t it be better having a community where you don’t have to hire more police? People will keep order if they see there are things the city is doing to help them,” Davis said.

The city’s Democratic primary is in June.

Does any presidential candidate “deserve” the Black vote?

Does any presidential candidate “deserve” the Black vote?
[…]

Racism after Graduation May Just Be What’s on the Menu

Racism after Graduation May Just Be What’s on the Menu

Since the post, I have personally spoken with Rev. Graham – reaching across cultural, racial and religious divides – and we both agreed that his comments were insensitive and not clothed in the right language to convey that he meant well and not ill. […]