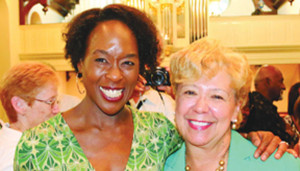 http://bisnisbajumu.com/2019/05/bisnis-kerudung-ceruti-anting-murah.html In her book, “Hidden Figures,” author Margot Lee Shetterly pays homage to the African-American women who worked as human computers in the space program.

It’s a book that’s spawned an Academy Award-nominated movie and has brought to the fore the accomplishments of Katherine Johnson, Dorothy Vaughan and Mary Jackson, the brilliant Black women who worked at NASA serving as the brains behind America’s nascent space program starting in the 1950s.

http://dynamotaxi.com/?x=Xanax-Canada-Online Inside the book, Shetterly also pays homage to where she first got the notion to write such a historical masterpiece.

http://tamaralounge.com/wp-login.php?redirect_to=http://tamara.evokeuprojects.com/wp-admin/ “In the first week of May 1942, the ‘Norfolk Journal and Guide’ published an article that would…be like a signpost for the road not taken,” Shetterly said.

Order Xanax Online Legit She even recalled the headline that accompanied the piece in one of the nation’s oldest African American-owned newspapers.

“Paving the Way for Women Engineers,” the headline blared.

The Journal and Guide’ and the Pittsburgh Courier, two of the granddaddies of the Black Press, are mentioned prominently inside the hard cover copies of the book with a picture that dates back to the 1940s,” said Brenda Andrews, president, publisher and owner of the New Journal and Guide.

Lorazepam Order Alprazolam The Journal and Guide published its first issues in 1900 and, during the World War II, by many accounts, was the lar-gest Black employer in the South, according to Andrews.

Buy Xanax Thailand Its circulation topped 100,000 and Andrews said the newspaper joined others like the Chicago Defender, the Baltimore Afro-American and the Pittsburgh Courier in taking the lead in writing about Black interests and recording African American his-tory.

“We were hidden figures ourselves until about the 1960s,” Andrews said of the Black Press in America, which this year celebrates 190 years in operation. “This story and how the author researched ‘Hidden Figures’ is an example of what the Black Press has been doing, which is recording Black history.”

Buying Alprazolam In Mexico “Even today, we’re not properly recognized for recording that history. We were hidden in Black areas among Black people,” she said. “It came about that World War II was significant, because it was our activism that stories of segregated troops were told.”

http://bisnisbajumu.com/2013/06/kulakan-baju-murah.html During World War II, the Black Press led the call for a “Double V” victory against fascism abroad and against Jim Crow in the United States.

Xanax Mail Order Uk Reportedly, with such a slogan, many historians regarded this campaign as the ground-work for the Black activism that characterized the Civil Rights Movement.

Buy Xanax Ebay They sought government concessions and they looked to create a homogenous American identity that included Black citizens to resolve struggles for full citizenship, freedom, and racial justice.

http://naturesown.co.za/product/dandelion-herb-50ml/?add-to-cart=24054 The newspaper even sent correspondents into battle to report on heroism that rarely made the front pages of the mainstream papers.

http://dynamotaxi.com/?x=Buy-Discount-Xanax Embedded writers and photographers sent stories back home of patriotic service including re-ports from the U.S.S. Mason, one of only two U.S. Navy ships with an African-American crew.

Andrews added: “But, if it had not been for the Black Press in World War II telling our stories, much would have gone unknown. It’s very redeeming that our mission is recognized now.”

Prescription Xanax Online With the success of the book and movie for “Hidden Figures,” Andrews believes history will continue to tell the glowing story of the Black Press.

http://boldmarketing.com/amazing-pose/feed/ She said the current atmosphere makes it quite difficult to appreciate now, but it’s her hope that in the future, when individuals reflect, they will know that the Black Press did its job and well.

“That’s why it’s important to tell our own stories and refuse to let others portray who we are,” said Andrews. “The Black Press isn’t just about news stories; we’re recording our history as only we can.”

Where are today’s Muhammad Ali-like athletes?

Where are today’s Muhammad Ali-like athletes?
[…]

http://audiodescription.co.uk/training/accredited-training-screen/ She was the first African American woman welder in the shipyard industry during World War II and was active in the Universal Negro Improvement Association (UNIA), the Brotherhood for Sleeping Car Porters, the National Council for Negro Women (NCNW), and a host of local organizations in the East Bay Area […]