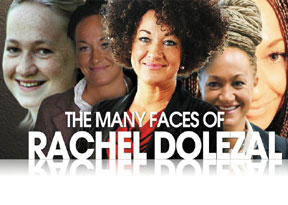 The many faces of Rachel Dolezal

By Jose Cassola, From The Miami Times

Rachel Dolezal’s 15 minutes of fame isn’t up just yet.

Since news first broke last week that the now former head of the Spokane NAACP chapter in Washington portrayed herself as Black — even though she was born white — people have not stopped talking about her. And she has not stopped talking about herself. Amid a social media firestorm and a barrage of criticism, Dolezal stepped down from her NAACP post on Monday after five short months, according to her statement published to the Spokane NAACP Facebook page.

In an interview with NBC’s Today show on Tuesday, Dolezal told reporters: “I identify as Black.”

Critics can’t fathom the idea why someone might misrepresent themselves by claiming they were Black. Dolezal even went as far as earning a leadership position in one of the nation’s top advocacy groups for Blacks.

But the NAACP was founded in 1909 in New York City by a group of whites and Blacks, who sought to make whites aware of the need for racial equality.

The controversy around Dolezal hasn’t been so much about a white woman leading an NAACP chapter. It was the fact that Dolezal misrepresented herself. Her parents, Lawrence and Ruthanne Dolezal, who have been estranged from their daughter for years, believe she may have wanted to boost her credentials as a Black activist and educator.

Adora Obi Nweze, president of the NAACP Florida State Conference and Miami-Dade branch, said there are a lot of issues.

“I think she and her family are having a big dispute and she shared some stories that put a lot of things into question. The specificity of what she’s gone through to create the stories around who she is, is a problem,” Nweze said. “That she’s white is not the story. As far as the NAACP is concerned, anyone can serve as long as they do a good job. Whites have served the NAACP, such as our Brad Brown, who is the first vice president and has served as president.”

Brad Brown, first vice president of the Miami-Dade NAACP chapter, said he’s surprised by how far the situation has escalated.

“I’m having a hard time understanding why it’s generated such a mass interest,” said Brown, who served as president of the Miami-Dade branch from 2000 to 2004. “A person can be white and work with the NAACP. I don’t know why she did what she did, but I applaud her for stepping down because the focus was becoming on her and not the issues.

A huge amount of news was being devoted to this and little focus on the major issues, such as the Voting Rights Bill.”

Brown said in the early 1960s, it was not uncommon for whites to serve in the Civil Rights Movement.

Dolezal has said her identification with Black people has gone as far back as when she was five years old. In an interview with Matt Lauer on Today, she said she “was drawing self-portraits with the brown crayon instead of the peach crayon, and the black curly hair.”

Then when Dolezal was a teenager, her parents adopted four Black children. Several years ago, she became the guardian of one of her adopted, Black younger siblings, Izaiah, now 21. Dolezal said Izaiah sees her as his “real mom and for that to be something that is plausible, I certainly can’t be seen as white and be Izaiah’s mom.”

Dolezal also has a biological son, who is 13, with her former husband, who is Black. She traced misconceptions about her background to news media reports that first identified her as “transracial,” then as biracial and then as Black, but she never corrected them, Dolezal said.

According to an article in The New York Times, Dolezal has identified herself as Black or partly Black on many occasions, including on an application for appointment to a Spokane city commission, where she checked boxes for white, Black and Native American. But Dolezal’s parents say she has no Black ancestry, only white with a trace of Native American.

As for her appearance, Dolezal has denied claims that she has put on blackface, even though she has transformed from a girl with fair, white skin and straight, blonde hair into a woman with skin several shades darker and brown, curly hair.

When asked on Today about the changes in her appearance, Dolezal said, “I certainly don’t stay out of the sun, you know, and I also don’t — as some of the critics have said — put on blackface as a performance.”

In her resignation letter, Dolezal said: “Please know I will never stop fighting for human rights and will do everything in my power to help and assist, whether it means stepping up or stepping down, because this is not about me. It’s about justice.”

Many students fail to profit from for-profit colleges

Many students fail to profit from for-profit colleges
[…]

Stone and five others created the California Black Chamber of Commerce in 1995 with the mission of providing programs and services to strengthen Black ownership and business opportunities throughout the state. […]