These days, it’s a scary environment for people to live in, especially if you’re an African-American male. People want to bring change, and they need to find a way to do it quickly.

For a lot of African-American individuals, they’ve been unfairly treated by law enforcement. So what’s someone to do? How about holding a protest and bring change. That was the mindset behind Colin Kaepernick’s plight to sit down during the national anthem. 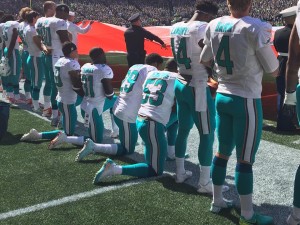 Nonetheless, even though Kaepernick is bringing a lot of awareness to police brutality, and injustice being served in the country, his form of protest is receiving a lot of public backlash. All Kaepernick wants is for people to get up in arms about African-Americans being shot and killed by police the same way they get riled up that someone isn’t standing up for the national anthem.

During the opening week of the season against Seattle, a few Dolphins players including Kenny Stills, Jelani Jenkins, Arian Foster, and Michael Thomas joined Kaepernick in his quest to protest.

“I chose to get involved to see if I could create change, raise awareness. And I want to make it clear that there is no disrespect to the military or to police officers —I’m not about that. I love everyone,” said Jelani Jenkins. “I would like to keep moving forward in the right direction with everybody: equal rights, equal opportunity. From my position, it doesn’t seem that it’s happening. That’s why I took a stand.”

Then the backlash found itself in South Florida too. Broward Sheriff’s Office had been asked by the police union to remove their escort services from the team. However, BSO wouldn’t comply and that’s when Dolphins owner Stephen Ross came up with a solution that would leave everyone happy.

Say hello to the RISE (Ross Initiative in Sports for Equality) Tailgate party.

Originally, RISE got founded in 2015.  The Ross Initiative in Sports for Equality (RISE) is a nonprofit organization. Their goal is to harness the unifying power of sport to advance race relations and drive social progress. RISE aims to spark action in the heart of people by using national public awareness campaigns and educational programming.

The event originally started out as a town hall forum earlier in the week between the Dolphins players, the organization, and the local and surrounding police officers in the community. The parties came together and decided of creating this tailgate in order to continue to the dialogue the three parties had. The town hall was player driven with RISE’s support and the tailgate was announced there was well.

Community leaders, youth, coaches, law enforcement officials and members of the military gathered for the RISE tailgate. The event had sponsored refreshments paid for by Thomas, Jenkins, Foster and Stills working with the RISE Foundation. 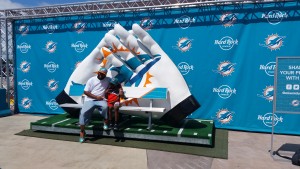 “But this country needs to have this conversation, there needs to be changed, and I think it’s such an important thing…I think it’s important. There’s a responsibility as an owner, and certainly, we saw what happened in Miami a couple of years ago with the bullying incident, so I hope this is something that takes great hold in this community and communities across the country so we can use sports to create change” said Stephen Ross.

The Major of the Broward County Sheriff’s Department Josefa Benjamin was also in attendance.

“I think the perspective right now (of kids toward the police) is not a good one because of what’s going on nationally,” said Benjamin. “However, I had the privilege to be a guest panelist on [former Dolphin Twan Russell’s] event yesterday and one of the things that he said that resonated with me was change starts with a conversation. But we also within that conference said it starts with a conversation but we have to see action after. Events like this, bringing the people out, it’s the action after the conference.”

The entire tailgate event is something that will continue to occur for the entire season. Check it out before the games at the North side entrance of the stadium.

Miami Dolphins: What Should the Dolphins Do at RB?

It’s safe to say that the Miami Dolphins have a unique way of conducting business when it comes to acquiring talent for their team. The reason that’s said is because in the 2012 NFL Draft […]

On May 28, 2019 forty-five graduating seniors from across South Florida gathered at Hard Rock Stadium to be congratulated on their academic achievements through an academic signing day […]

How Do You Lose to the Jacksonville Jaguars? At Least Ryan Tannehill Shined!

You know it’s bad when fans are starting to rant about how bad the coaching is and it’s only week two. We’ve all had a lot of high expectations for the Miami Dolphins this season […]