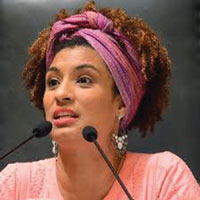 The Movement for Black Lives Honors the Life of Marielle Franco, Stands with Black Freedom Fighters in Brazil

On March 14, 2017, Marielle Franco an Afro-Brazilian council member was brutally assassinated in Rio de Janeiro, Brazil. She was a human rights advocate raised in the favelas, and thousands have gathered to mourn her. Black organizers in Brazil reached out to the Black Lives Matter Global Network, who along with the rest of the Movement for Black Lives, have issued the following statement in support of our family in Brazil, and all those who stand for the liberation of all Black people everywhere.

“We are outraged and devastated by the political assassination of Marielle Franco, a powerful freedom fighter and defender of the rights of Black people, favela dwellers, and other targets of police violence in Brazil. Marielle was a lesbian, Afro-Brazilian council member from Rio de Janeiro who was assassinated on Wednesday, March 14th in her car for courageously fighting against police violence and corruption. Just two weeks ago, on Sunday, March 11th, Marielle denounced recent actions of military police terrorizing residents of the Favela de Acari; many believe that this was the final motivator of her murder.

In April and November of last year, Black organizers from across the U.S. met and spoke directly with Marielle about our collective need to build Black power and solidarity beyond borders. We are clear that throughout the world, Black people face similar patterns of violence, so this injustice is personal. We grieve her death because she is one of our own, fighting the for the liberation of all Black people and even when separated by superficial borders.

This is not a time to be silent or afraid. Marielle’s death, and those we have lost in the struggle before her, is a call for more action. Black people of Brazil, our bond is one that is deep and ancestral. When you call on us, we will stand ready. We will honor your leadership in the days, months, and years that follow until we have built a movement for all Black people to achieve self-determination and safe communities worldwide.”