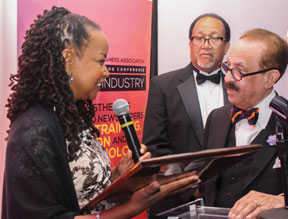 The National Newspaper Publishers Association honors Robert W. Bogle a champion of the Black Press during their 2017 National Convention

In addition to the NNPA Black Tie Gala, Black publishers joined with the Urban League of Broward County for a cruise down the Intercostal waterways for an evening of fun, entertainment, and enlightenment.

As host publisher of the NNPA Conference, Bobby R. Henry, Sr. of the Westside Gazette, was wondrously amazed by the success of the entire conference. “This event was certainly the seal of approval as we honored a giant of a man. To see and feel the respect of the participants in the conference as well as all of the supporters that made this conference a huge accomplishment was truly heart felt. I dare not begin to mention by names of those who contributed for fear of overlooking to so many. However to all thank you so very much for showing real Southern hospitably to all our guest and to those who afforded our students the opportunity to embrace history.”

Dr. Benjamin F. Chavis, Jr., president and CEO of the NNPA, capsulized the significance of the conference by noting the longevity of the organization.

“Tonight we honor one of the stalwarts of the Black Press-Bob Bogle, president and CEO of the Philadelphia Tribune,” Chavis added.

Bob Bogle shared a few observations regarding the NNPA convention as well as taking an opportunity to put things in perspective in the wake of the recent presidential election.

“My observations of this event are the same as they’ve always been in the past. I’ve never come to an NNPA Convention where I didn’t learn something and been the beneficiary of having come.”

When asked if he could speak to the newly elected president of the United States Donald Trump regarding his brief stint in office, he provided the following retort.

“Everyone has the right to be at the table. The issue of equal access and opportunity should be shared and enjoyed by all of us, not just some of us.”

“In spite of the fact that Mr. Trump, our president has made some derogatory remarks about everybody but my dog Gooch, I wish him well, only because I wish America well,” Bogle added.

Dr. Benjamin F. Chavis, Jr. also expressed a feeling of resurgence among more recent supporters of the Black Press and the impact of having a new administration in the White House.

“I’m optimistic because I see millennials, Black leaders, young people reading our newspapers again, They’re not just depending on what’s on twitter or Facebook. They want the in depth investigative reporting that’s in the Black press. So I think you’re going to see a sense of call and response. The truth of the matter is what just happened in Washington was a response of President Obama being in the White House for eight years. So now we have to have a response to Trump being in the White House. This is no time for us to throw our hands up. We must stay engaged. By God’s grace I believe the Black Press is going to be that one national organization that is going to raise the consciousness of 47 million Black Americans in 2017.”

Denise Rolark Barnes, chairperson of the NNPA and publisher of the Washington Informer, spoke regarding the future of Black newspapers in America. She also pointed to an enjoyable moment during the convention.

“I think we’ve had a successful convention. We’re trying to help our publishers make this transition, adding to their traditional print publications with the new technology to digital and social media and pushing the idea about how important events can be and so I think we’ve gotten that message across.

“The highlight for me was the 150 students that came from the Broward County Public Schools along with their teachers and the School Board and folks like that. So that’s what I was really excited about because we’re working to engage the next generation to teach them the history and legacy of the Black Press but also to encourage them to look at our newspapers as viable options for employment opportunities when they get out of school.”

Albert Tucker, Vice-President of the Greater Fort Lauderdale Convention &Visitors Bureau hosted the NNPA Kick off Reception and welcomed the opportunity to showcase the conference locally.

“Greater Fort Lauderdale was beaming with pride as we were able to host two prestigious organizations: the NNPA and the National Urban League (NUL). The opportunity to share our warm sunshine with the NNPA and NUL was important, but the most significant part of the experience was the message that was shared on the importance of our Black history and the value that we have when we work together.” said Tucker.

Nissan Corporation of America representative Jeffrey Webster is the Director of Diversity for the company. He said that his company and the NNPA shared a common bond and encouraged other major corporations to work together with the Black Press.

Bogle attended Cheyney University in Cheyney, Pennsylvania, where he matriculated to study Sociology, earning a B.A. in Urban Studies. He attended the University of Pennsylvania’s Wharton School of Business and Finance to study marketing and economics.

In October 1997, Bogle was appointed as a governor to the Board of Governors of the United Way of America and board member to the Philadelphia Orchestra. In 1995, 1997 and 1999, the NNPA honored Bogle with the Russwurm Award, the highest honor to “Best Newspaper in America,” in the name of John B. Russwurm, co-founder of Freedom’s Journal, the first African American newspaper in the U.S. (1827). In June 2000, at Drexel University, Philadelphia, an honorary doctorate of Humane Letters degree was bestowed upon Bogle.

The NNPA is a trade association of the more than 200 African American-owned community newspapers from around the United States. Since its founding 76 years ago, NNPA has consistently been the voice of the Black community and an incubator for news that makes history and impacts our country. As the largest and most influential Black-owned media resource in America, NNPA delivers news, information, and commentary to over 20 million people each week. Americans from all backgrounds seek news from the Black perspective from the NNPA member newspapers around the country. 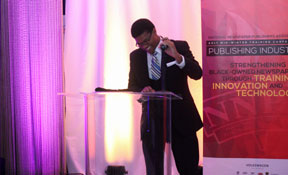 The rise and fall of voter ID laws

The rise and fall of voter ID laws
[…]