While I was researching my own family history, I stumbled upon information about the Stacy family and decided to reach out to them. Meeting with the family in Georgia on several occasions, I listened to their stories, which contradicts previous publications of the events that led to the tragic death of Rubin Stacy in Fort Lauderdale. Having learned of the family’s version, I felt it was necessary to give them a voice through this book. The Rubin Stacy story focuses on the only recorded Broward County Florida lynching involving a young African American man in 1935; and the impact it had on his young wife, his child, and extended family.

Who am I? I am Mary Russ Milligan, I was born a twin girl at First Provident Hospital and delivered by Dr. Sistrunk in Fort Lauderdale (Broward County) Florida. I grew up in the Northwest section of Fort Lauderdale, Florida, in the subdivision of Sweeting Estates. I attended Nova Southeastern University and received a Child Development Associates Certification in Early Childhood Education through Broward County Child Care Connection. I am also an Alumni of Dillard High School. I officially retired as a professional child care owner and operator of Kids Zone Family Day Care in the early 2000’s. Aside from working in other professions I have and still devote most of my energy historical research and community service. 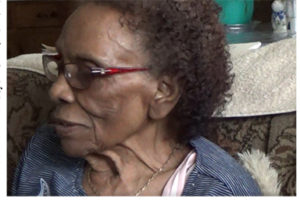 I have devoted much of my time to the Rubin Stacy story, because it is an important piece of literature for a community in search of fair and balanced views of his life. I traveled to a number of southern states and conducted one-on-one interviews with the Stacy family, neighbors, and associates gathering information from those who knew Rubin personally. These sources produced in-formation that raised questions as to what actually happened to Rubin Stacy and his family. Questions such as: Who was the real Rubin Stacy? Was he a vagrant or a working resident of Fort Lauderdale? Why was he accused of the crime that led to his death? Did the alleged victim have a motive for having Rubin Stacy arrested? How well was the investigation conducted by the Sheriff? Was the Sheriff in any way complicit to the lynching? Could the Sheriff have done a better job protecting Rubin Stacy? What association, if any, did the Sheriff have with participants in the lynching?

My research was born around the time of 2019 – 2020 community protests of social injustice for events such as the deaths of George Floyd and Breonna Taylor. As a result of the “Awakening,” it seemed an appropriate time to share Rubin Stacy’s story.

In order to share my research with the community, I am preparing a series of articles in my hometown newspaper, the Westside Gazette. The articles will be released every two weeks between now and July 10, 2021, the 86th anniversary of the lynching. In the articles I will share my research and insights I have gained concerning the terrible history of lynching and racially motivated murders in South Florida and our nation. In addition to the articles, I will appear on an upcoming episode of the “Jus a lil bit”  podcast” with Bobby R. Henry, Sr., publisher of The Westside Gazette.

After Fort Lauderdale resident Rubin Stacy was unjustly lynched in 1935, an unlikely tale from those who were involved in his murder has been reported time and time again. Even though the false narrative has been questioned repeatedly by the Black Fort Lauderdale community for decades, efforts to uncover the true story about Rubin Stacy as a husband, father, and entrepreneur in Fort Lauderdale was only recently captured by a local researcher. This clip is excerpt from one of the oral history interviews that Mary Russ conducted with Irene Slaughter, a niece of Rubin Stacy. Slaughter, who died in December of 2020, was seven years old when her uncle was murdered.