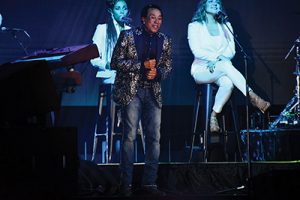 Motown is the blueprint for all commercial black music. It’s the real definition of the American Dream. Motown has produced the soundtrack to our lives for several years. It’s easy to say that Motown is responsible for transforming black artists into professionals. It was the leadership and vision of Berry Gordy that changed the face of history and music. Black people celebrate Soul Train as a staple in the community, but Motown is celebrated for being one of the first widely successful African American-owned record labels.  Last week, the Motown legend Smokey Robinson graced the stage at the Seminole Casino Coconut Creek located in Pompano Beach, FL.

“My grandmother used to play Smokey for me all the time” as a kid, mentions Palm Beach County resident Curtis Jones. “I can’t believe I had the chance to see him in person. I knew he would be phenomenal, but I had no idea how much energy and personality he had when he performed live. Smokey was a real treat.”

The outside concert started very promptly at 8:30. As soon as the background singers and band emerged from their trailers wearing all white, the crowd immediately showed excitement. Next, Smokey Robinson appears on stage looking as smooth as ever, not bad for an 81-year-old. He wore a silver sequined blazer with a sheer black top, paired with studded slim-fit jeans and that young-looking babyface. He kicked off the concert with his classic 1982 song “Be With You”. As soon as the crowd heard him sing the words “I don’t care what they think about me”, you could tell that this concert would be memorable.

Smokey left no stone unturned. He ran through his massive catalog of hits effortlessly. There was also no shortage of fun anecdotal stories and moments. Smokey shared a true story about Stevie Wonder and a time they collaborated on a song.  He then transitioned into the song that inspired the story “Tears of a Clown”.

“Stevie Wonder is my brother. One year we were having a Motown Christmas Party, we had them every year and we always had a good time”, mentioned Robinson. “By the time Stevie got there. I was already there. When Stevie walks in, he comes right over to me. He tells me “Smoke, as the dawn breaks and the morning dew kisses all flowers, trees and grass, there’s a great possibility that all people of the world will be free”. “Stevie mentioned he had some music that he needed lyrics to, so he wanted to work with me on the song.”

The crowd was a very diverse mix of people. This was just a testament to the various types of fans he has impacted throughout his illustrious career. It is also a powerful reminder of the influence Smokey had on the “Motown Sound”. Fans of Robinson are aware of his remarkable songwriting. Robinson has written music for artists like Mary Wells, The Jackson 5, The Marvelettes, and The Supremes. He was very vocal about his work with The Temptations as he went through a medley of the songs he has written, including songs like “My Girl” and “Get Ready”.  Before he broke out into “The Way You Do The Things You Do”, he had some words for the crowd.

One of the highlights of the night came when he did a strip-down version of one of his most beloved songs, “Tracks of my Tears”. The fans in the crowd wasted no time in singing along to every word. Robinson’s vocals soared even more on the stripped-down version. The band grooved through the song beautifully, while the backup singers were the icing on the cake. Smokey gave a special shout-out to the special veterans that were in the crowd. To close out the concert, he had an audience competition to see which side could sing the loudest. The last song of the night was “Cruising”.

Smokey Robinson has been revered as one of the greatest songwriters of all time. His artistry has allowed him to be a record producer, singer, chief songwriter, and record executive director. He got his start as the lead singer for the Motown group The Miracles. Robinson was inducted into the Rock and Roll Hall of Fame in 1987 and received the BET Lifetime Achievement Award in 2015.

The tour is scheduled to last into the summer of 2022.