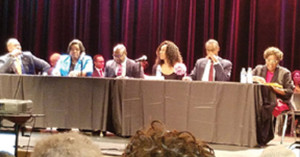 Last week: “The dismal statistics presented at the recent “State of Black Broward” conference: only eight of the county’s 90 judges are Black; Black motorists are stopped 1.9 times more than whites for seat belt violations; median household income is $74,000 for whites and $43,000 for Blacks; the unemployment rate last year was 4.4 percent but nine percent for Blacks; and, of the more than 800 firefighters in Broward Sheriff’s Office Fire-Rescue, only 54 are Black. Combined with recent studies showing racial disparities in school suspensions and sentencing, there is but one conclusion: Broward has a race problem,” stated Clarence V. McKee, president, McKee Communications in an op-ed in the South Florida 100- Sun Sentinel Sunday March 5, 2017.

On the night of Feb.  28 the African American Research Library & Cultural Center (AARL&CC) auditorium was left with standing room only. Hundreds of attendees poured in from every corner of South Florida, producing a rich sea of mahogany, caramel, and ebony. The event was fitting, for America was bracing itself for President Donald Trump’s first address to Congress, a speech projected to be laced with familiar racist rhetoric of Black & Brown violence and poverty we had come to expect. The packed house proved this event was necessary. 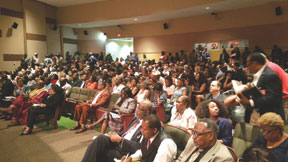 “Everything will not be solved tonight.” Moderator Rodney Baltimore of HOT 105 FM stated, a fair recognition of the mountain of issues to address.

And there are many.

Out of the 1,896,425 Broward County residents, 29% are Black and firmly concentrated within the center of the county where poverty and unemployment rates are highest. The median household income is $74,000 for Whites but only $43,000 for Blacks. As a result, 38% of Black children live below the poverty line in contrast to only 13% of White children. Nearly one-third of Black High school students do not graduate and Black youth are arrested five times more than their White counterparts.

“Prosperity abounds in many areas,” said Dale V.C. Holness, District 9 County Com-missioner and Chairman of BBEO, “Yet we have many of our residents that for whatever reason have been left behind.”

It seemed the cooperation between law enforcement and the criminal justice system served as a major reason and, un-fortunately, youth and those who have received criminal convictions are adversely affected. Panelists discussing political engagement emphasized the damage interaction with the law can cause.  Although one can apply for restoration of voting rights after serving time, it is not an attainable reality for everyone, a truth pointed out by Dr. Brenda Snipes, Broward County Supervisor of Elections. State Representative Bobby DuBose proposed for “automatic restoration of rights” to those who have served time.  Still, many in the Black community who can vote do not or they have never registered.

“We should all work together to make sure everyone we know is registered to vote.” stressed Commissioner Holness.

Despite an absence of a youth voice on panels, their issues became a running theme throughout the night. The Education panel touched heavily on education quality and the need for community partnerships with schools.

Mikelange “Mike” Olbel, CEO/Founder of Team Saving Our Youth passionately emphasized the urgency to act on behalf of our children. His proposal to form partnerships between nonprofit and private organizations and schools received positive responses from the audience.

It was Marsha Ellison, NAACP Broward County Chapter President, who reminded us how instrumental schools were in determining a child’s future.

“The largest entry points in the criminal justice system are through the school.” Ellison pointed out. Ellison represents the importance of advocacy in the Black community as she successfully led a delegation in fighting for mandatory civil citations for youth, an initiative that has transformed juvenile justice in Broward County. Despite this, Black youth continue to be ushered into the criminal justice system.

“The pipeline to prison is well-insulated,” Chief Probation Officer Cassandra Evans passionately argued, “We must think differently. We must have systematic solutions for a systematic problem.”

Youth and their parents continue to face a similar foe: unemployment. The unemployment rate for Blacks in Broward stands at 11% and is significantly less for Whites. Newton Sanon, President of OIC of South Florida, touched on the need to prepare for long-lasting careers.

Carol Hylton, Executive Vice President of CareerSource, built upon the idea of contextual learning regarding youth who she believes will benefit from hands on training.

“It’s not just college anymore,” Hylton accurately pointed out. She argued for the need to employ youth through partnerships with private organizations. During a brief experimental opening of the CareerSource portal, nearly 3,000 youth applied for jobs. Unfortunately, only a fraction were linked to job opportunities.

Black owned businesses received their fair share of attention that night. Commissioner Michael Carn of the City of Oakland Park and Sandy Michael McDonald, Director of the Office of Economic and Small Business Development, reaffirmed their commitment to the development of minority owned businesses and promising to remain accessible. Barron Channer, a South Florida real estate developer, called for the development of Black businesses through race conscious procurement.

Some topics were noticeably missing: the disrepair and neglect of predominantly Black & Brown public schools, aggressive gentrification pushing the Black community westward, and the loss of the Von D. Mizell Center to the YMCA to name a few. But it was a start.

“It was timely, but it only scratched the surface,” Newton Sanon said afterward, “It was a great start and there’s much more work to be done”.

“I’m looking forward to engaging in future dialogue with the community and working towards the implementation of the solutions the panelists discussed.” Olbel said.

And when exactly can we expect to revisit and act on these issues?

“The next meeting will be in a symposium format and will coincide with Juneteenth celebrations,” Chairman Holness explained, “The conversation must continue. The entire community must come together to challenge these disparities. We will follow up with this and move forward.”

In the fantasy of white supremacy, the FBI spent millions in time and treasure to plant false evidence of Communist influence on Martin Luther King — while in reality, Russians today are using the racial tension in American to incite violence and paralyze our society, while they work towards global dominance. […]

A showcase of political impotence […]

February is Black History Month and I have been searching for a story about African American contributions to bicycling. I found the story in my bike love: bicycle travel. In my mind, the 25th Infantry Bicycle Corps are trailblazers of bike touring. […]