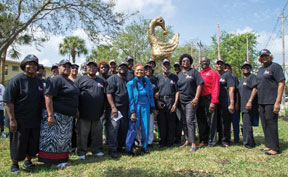 FORT LAUDERDALE, FL – The Trailblazers of Broward County, an organization dedicated to preserving and promoting local African-American history and achievements, recently unveiled a long-awaited and highly anticipated historical monument at Sistrunk Park, located at 200 W. Sistrunk Blvd.  The monument, a six-foot bronze sculpture of a Sankofa bird perched atop an elegant base with cascading water, honors Fort Lauderdale’s past and pays tribute to the many pioneers who made significant contributions to the progress and advancement of the entire City and its African American community.

Lillian E. Small, business manager of the Trailblazers, served as the event’s Mistress of Ceremonies for an inspirational program that featured an Invocation by Dr. Derrick Hughes, Pastor of First Baptist Church Piney Grove; the Pledge of Allegiance led by Commander Larry Roberts, American Legion Post 220; the Occasion, delivered by Sonya Burrows, vice president of the Trailblazers; along with a Welcome and Acknowledgements from Fort Lauderdale Vice Mayor, Robert McKinzie.

State Representative Bobby B. DuBose provided background on the project, which began as part of the City’s Centennial Celebration in 2011 while he was serving as a Fort Lauderdale City Commissioner. Representative DuBose had the honor of introducing the event’s keynote speakers, Anne Fleming Naves, Ed.S., and Dr. Dorothy Jackson Orr.

Both speakers delivered heartfelt historical reflections about their personal experiences, the struggles they faced, and the challenges they over-came growing up in Fort Lauderdale’s northwest community.

Award-winning artist George Gadson spoke about his inspiration for creating the monument.  He explained that visually and symbolically “Sankofa” is expressed as a mythical bird that flies forward while looking backward with an egg (representing the future) in its mouth.

“’Sankofa’ teaches us that we must go back to our roots in order to move forward. That is, we should reach back and gather the best of what our past has to teach us, so that we can achieve our full potential as we move forward,” said Gadson. “The project was a true labor of love that filled me with the spirit and soul of the community.”

In his closing remarks, Beauregard Cummings, president of the Trailblazers of Broward County, spoke about the significance of the legacy project.

“The monument is a re-flection of the values and ideals that are deeply woven into the fabric of our community: family, education, religion, fellowship, a strong work ethic, and an entrepreneurial spirit,” said Cummings. “The Sankofa statue is dedicated to all those who came before us and upon whose shoulders we stand. The individuals who overcame injustice and fought for equality; the men and women whose sacrifices of yesterday became our opportunities of today.”

Following the formal remarks, everyone in attendance gathered in front of the monument for the unveiling of the Sankofa statue, which was led by Derek Davis, curator of Old Dillard Museum. Immediately following the unveiling, Pastor Hughes led the audience in a brief prayer to officially dedicate the monument to the community.

City of Fort Lauderdale Vice Mayor Robert McKinzie eloquently summed up the day’s events stating, “In many ways, the dedication of this historical monument marks a new be-ginning for Sistrunk Park and the surrounding area. It is my hope that the monument will serve as a unifying symbol for our community.  That it will be a catalyst to activate this park with more events, music, art, and activities. That it will serve as a community gateway inviting neighbors from all over our City to celebrate, experience, and enjoy our unique culture, heritage and artistic expression.”

For more information about the legacy project or the Trailblazers of Broward County, call (954) 735-8973.