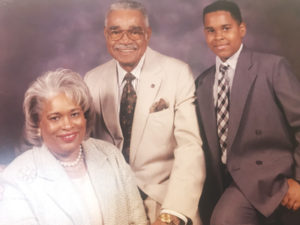 On behalf of MIA Media Group, it brings me great sadness to learn of the passing of South Florida civil rights legend and Miami Times Publisher Emeritus Garth C. Reeves Sr. At the age of 100, the patriarch of the Black Press passed away on Monday, Nov. 25, 2019. His death comes just over a month after my team —CEO Dexter Bridgeman, photographer Joe Wesley and I — visited Mr. Reeves’ beautiful Miami bayfront home to shoot a photo to grace the cover of MIA magazine. Little did we know, this would be his final formal photo and interview, where he discussed everything from the future of The Miami Times to his last wishes on earth.

The news hits this magazine even harder because our managing editor, Yanela G. McLeod, of Tallahassee, was close friends with Mr. Reeves and even wrote her dissertation as well as a new book The Miami Times and the Fight for Equality based on the power of the newspaper, founded by his father H.E.S. Mr. Reeves, that fought to end segregation in South Florida. Garth Reeves and his father, both Bahamian natives, used the newspaper to champion social justice and demand dignity for Miami’s Black populations.

“He showed me that being a part of the Black Press was more than pen and paper, or ‘turning around’ an article,” said McLeod, who was awarded a scholarship through his endowment while attending Florida A&M University (FAMU). “It was about having the guts to confront a wrong and the courage to speak up about it. Mr. Reeves lived an unselfish life that demonstrated our platforms have purpose. How we use it determines the difference we make in people’s lives.”

During the three hours I spent at his home for the photoshoot, I learned learned so much about  Reeves. He wasn’t a man who bit his tongue. He adored his daughter, Rachel Reeves, 69, who preceded him in death in September. And he loved The Times! In fact, the only time he smiled during our photo session is when I placed a copy of his newspaper in his hand. That turned out to be the very photo we used for the cover of MIA magazine’s Miami Book Fair issue.

In case you’re wondering, one of Reeves’ final wishes was to live long enough to see the completion of renovations to his newspaper’s historic headquarters in Liberty City. Exactly when will that newsroom reopen? What challenges now lie ahead for the leadership at the Times? Will they continue to meet Mr. Reeves’ necessary expectations? I can tell you; those questions were on his mind during our in-depth conversation, which we now know where his final days. In the words of McLeod, who expressed deep sorrow at the loss of her friend, “An era has left us. He came and changed the world.”T