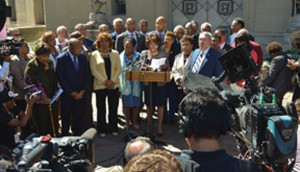 Following a bizarre ex-change with American Urban Radio Networks White House Correspondent April Ryan, the Congressional Black Caucus is in talks with President Donald Trump to set up a meeting.

Trump asked Ryan, a veteran Black journalist, if she could set up a meeting with him and the CBC, as if Ryan was an employee of the White House or a special assistant to the CBC. Ryan responded by saying, “I’m a journalist.”

The confusing exchange was one of several moments at an unscheduled press conference Trump held at the White House on February 16.

“Since the White House has reached out in an appropriate manner to request a meeting with the caucus, I am now in discussions with them about setting one up,” Congressional Black Caucus Chairman, Rep. Cedric Richmond (D-La.) said in a statement after the press conference concluded.

During an interview on MSNBC on February 17, Rep. Hakeem Jeffries (D-N.Y.) said that, “Steve Bannon cannot be in the room,” when the CBC meets with President Trump. “He’s a stone cold racist.”

Bannon is currently the president’s chief strategist and served as a high-ranking executive at Breitbart News, an online publication known for trafficking in right-wing, alternative news that Bannon himself defined as “the platform for the alt-right.”

The term “alt-right” is increasingly used to describe a new and emerging movement of racists and White supremacists.

Chairman Cedric Richmond (D-La.), said the following in response to President Trump’s comments regarding a meeting with the Black Caucus:

“President Trump has been in office for almost a month and the Congressional Black Caucus — which at a historic 49 members is almost a fourth of the House Democratic Caucus and represents millions of African Americans — did not hear from the White House until we introduced ourselves on Twitter after the White House press conference today.”

The statement continued: “For whatever reason, the letter the Congressional Black Caucus sent to then President-elect Trump and incoming White House officials on January 19 was not enough to get their attention.  As the letter explained, President Trump’s ‘New Deal for Black America’ is ill-informed and insufficient and he would be wise to tap into the decades of expertise held by the Congressional Black Caucus when it comes to addressing issues that affect African Americans.”

The CBC, which is now at its largest membership in history, traditionally requests a meeting with the new president after the inauguration.  Ironically, some of the meetings the CBC had with President Obama, specifically on the topics of jobs and the challenges of Historically Black Colleges and Universities, have had tense moments.

President Obama did not meet with the Congressional Black Caucus during his first year in office. Meetings between Obama and the CBC were scarce even though most of the members and the President were members of the same party.

“Boys from the hood; Doing good”

An interview with Prophet John McGill. This is the first in a number of interviews from the series: “Boys from the hood; Doing good”. This series is the brain child of Prophet McGill as he […]