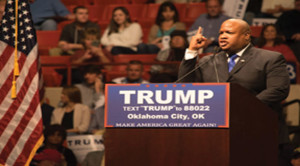 Mark Burns, an African-American pastor and surrogate for Donald Trump, apologized Monday night and again Tuesday for tweeting a cartoon of Hillary Clinton in blackface.

But he said he still stood by his message that Clinton and Democrats pander to the African-American community.

“I’m going to apologize for the offensive picture that many thought was offensive, but I’m not apologizing for the message that it was carrying,” Burns said.

The original tweet, which no longer appears on his timeline, included a meme of Clinton in blackface with a T-shirt that says “No hot sauce no peace!” The image, captured in a screenshot posted by CBS News, also shows her holding a sign that says #@!*6′ the police.

A thought bubble shows the cartoon version of Clinton thinking: “I ain’t no ways tired of pandering to African Americans.”

“Black Americans, THANK YOU FOR YOUR VOTES and letting me use you again.. See you again in 4 years,” Burns tweeted with the picture.

As Trump has attempted to expand his outreach to Black voters in recent weeks, he has enlisted the help of Burns, an evangelical televangelist.

By Eliza Collins, US TODAY