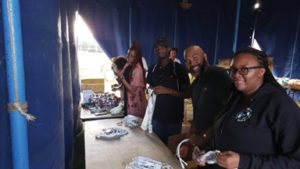 On February 12 of last week,  a group of  less-privileged youths and families was invited to attend a renowned circus extravaganza – The Universoul Circus. For some tickets were relatively easy to obtain. However, for those who aren’t as fortunate to afford such luxuries, it was next to impossible. Luckily, a corporation came onto the scene and decided to allow the night of a lifetime for the families.

The initiative was called “Family Open House;” a campaign fronted by Cedric Walker, the owner of the Universoul Circus. His motive was to give back to the underprivileged communities across the country through fun performances, a spectacle of games, and food for the whole family. This effort is now in its fifth year, approximately, in every city in the United States with the organizations that help those families in need. 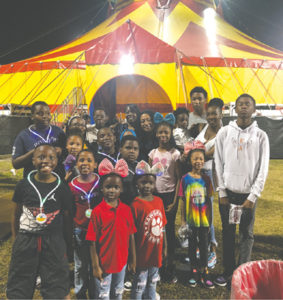 I was fortunate to take part in the preparations for the Family Open House event. Other volunteers from different parts of Miramar to Fort Lauderdale and I offered a helping hand to make this family night experience an enjoyable one. This involved putting together toys, providing food & drink, and most importantly demonstrating a positive attitude that made the families and children feel welcomed.

While lending a helping hand, I was able to meet some prominent people who aided in the building process of the Family Open House initiative.

The first was the organizer, Amari Ballard, who was associated with the Universoul Circus. She spoke on her many years of being involved with different underserved community organizations, with the sole intent to give them a night of their lives. Being the organizer of a long-running social gathering, she is not one to let pressure get to her. Calm, poised, and ready to be the provider to the underprivileged, she certainly made a believer out of me, realizing that this initiative will carry on for many more years to come.

Another volunteer I had the pleasure of interviewing was Anthony Taylor, a member of the Church of Christ Holiness in Fort Lauderdale. He was told of the Family Open House by his superior, Jackie Shepard. This was his very first time being a part of this fun drive, along with his daughter, in an effort to give back to the community.

“I wanted to, you know, lend a helping hand.” Taylor said, “It’s our future that we need help through these children. It’s to shed some light and to give support.”

But all of the festivities wouldn’t have been welcomed into South Florida without a great partnership with the organization known as “Sharing Hope Empowerment and Reaction” (S.H.E.A.R.)

S.H.E.A.R. was established all the way back in 2001 by a woman named Brilla Smith, founder of S.H.E.A.R. Inc., and mother of the current CEO and community activist, Anthony Durden. It is a service that focuses on the community of those underserved, regardless of racial or religious back-ground. They offer any help and shelter to needy families with opportunities of a lifetime. Such is the case for Universoul Circus. S.H.E.A.R. has collaborated with prominent names in South Florida such as the Miami Dolphins and Miami Heat in community events. Their goal is to work with other establishments with the purpose of helping the disadvantaged communities in holding gatherings for them to enjoy. He describes it as being “a voice for the voiceless who don’t have the same financial opportunities as others do.” The group had to raise the money to feed the kids due to other partnerships and other events.

Anthony spearheaded  the collaboration with the Universoul circus  held in Florida. I got to talk to him and learn a little more about what S.H.E.A.R’s role was in it all. Ultimately, they were the ones who sent the word out to other family homeless shelters and community youth-building groups to provide them the chance to enjoy themselves on a night of fun-filled extravaganzas.

In my interview with Anthony, he spoke on his initial knowledge of the Universoul Circus from their show in Miami Gardens two years ago. His mentor at the time, Ed Haines, connected Durden to the circus and allowed him to see what went on un-der the tent. With such a star-studded group of people and a positive energy to get people jumping out of their seats for joy, Anthony knew he wanted to bring youths of Fort Lauderdale to the circus.

Two years of working with the circus later, after communications with both Cedric Walker and Amari Ballard, S.H.E.A.R. is now a full-time collaborator with the Universoul Circus for Fort Lauderdale.

As the time slowly came to be seated, I was offered front-row to see the magic take place. As a past attendant of the circus myself, I thought I was prepared for the festivities this time. Needless to say, I was completely taken back by just how magnificent the show truly was.

It displayed the talents of performers from around the world, far and wide. There were acrobatics, animals, musical entertainment, and so much more that can hardly be put into words.

Once again, the Universal Circus displayed not only the best live performances of the decade, but put the importance of equality onto the forefront – that no matter anyone’s personal background – that we as a people, are universal to one another.

My time at the Universoul Circus was one for the ages. It inspires me to know that there are still people out there who  have a hand in providing those less fortunate an opportunity to be amazed in the most positive ways imaginable. I look forward to seeing more of both The Universoul Circus and S.H.E.A.R. Inc., and what they have in their plans for  helping the underserved families and organizations to enjoy life to the fullest.