It’s about time Taraji P. Henson, after a string of B-movies (Proud Mary, Acrimony), rocked a bonafide comedy. On talk shows her innate sense of humor is evident. On the big screen (Hidden Figures, The Curious Case of Benjamin Button) and small one (Empire) she’s built a solid, award-winning rep in drama. Now she’s digging into ribald humor and has surrounded herself with the right producers (Girls Trip), director (Adam Shankman, The Wedding Planner, Hairspray), screenwriters (Tina Gordon, ATL; Peter Huyck, Veep) cast and crew. If most of the ingredients are right, the cake will turn out just fine. 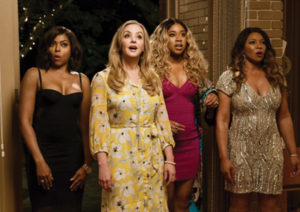 The source material for this flagrant, shameless comedy is What Women Want (2000), directed by Nancy Meyers and starring Mel Gibson. (Remember the days when he was loved?). He played a chauvinistic advertising executive who, after a freak head injury, could hear what women thought. He used that advantage to rally against a female exec who got a promotion he wanted. In the process he learned life lessons. Hold that thought.

Fast forward 19 years. Ali Davis (Henson) is a top agent at an elite sports management firm. She drives a Porsche (leased), has an overly-attentive assistant (Josh Brener, The Front Runner), whom she treats like a dog and a bevy of girlfriends (Tamala Jones, Wendi McLendon-Convey, Phoebe Robinson) she counts on for moral support. Ali needs all those trappings if she is to survive the constant stream of disappointments and derision she encounters with her male peers at Summit Worldwide Management.

The source of Ali’s biggest frustration is that she can’t make partner and is constantly over-looked by her boss Nick (Brain Bosworth, former Seattle Seahawk), who stifles her: “You don’t connect well with men. You do well in your lane. Stay in your own lane.” Even though she handles top star athletes like Lisa Leslie and Serena Williams, her achievements are marginalized by her colleagues.

The agency is trying to land the next big basketball draft pick, a skinny talented young player named Jamal Barry (Shane Paul McGhie). That’s the easy part. He’s managed by his pushy, stage-dad, health-freak father Joe “Dolla” Barry (Tracy Morgan), who is a pain in the ass. That’s the difficulty. The agent who signs Barry will be the next hot shot at Summit. Can Ali take the crown?

What Women Want, was a genteel, safe romantic comedy. What Men Want, is not. Twenty minutes into it, the outrageous sight-gag sex scenes, flippant dialogue and over-the-top performances yank the old premise firmly into the 21st century with a brand of humor fans of Bridesmaids will enjoy. There isn’t one subtle comic turn in this entire film. That gives Henson a chance to show her Tiffany Haddish side, which is more than willing to do anything to make viewers laugh.

Tucked into the debau-chery are moral-to-the-story subplots that are somewhat touching. Ali’s romance with the hunky bartender Will (Aldis Hodge, Straight Outta Compton) involves his young son Ben (Auston John Moore) and Ali’s selfish deceit. Her egocentric antics test her friendship with her girlfriends. And, the way she treats her assistant Brandon, who is gay, goes from patronizing and vile to dehumanizing. Ali’s got issues. Lots. And when she’s being introspective, she admits it: “Winning doesn’t matter if you’re a horrible person.”

The inciting incident that changes her trajectory comes when she meets a weird psychic named Sister (Erykah Badu) who gives her a cup of a magical, drug-laden tea. The mysterious potion, along with a head injury, makes Ali hear what men are thinking. As she hones this new talent, she picks up the hidden feelings of her fellow workers (no wonder they never invite her to their weekly poker game), her assistant (he really wants a promotion) and even her supportive dad (Richard Roundtree).

The script was developed by writers whose wheelhouse is sitcoms, so this modern tale is told in broad strokes. If you’re looking for a demented and sophisticated comedy (The Favourites), look elsewhere. Every situation here is meant to make the targets (urban and female audiences) laugh until they lose bladder control.

Tracy Morgan is clearly in his element as the dodo-brain dad. Can’t tell how much of his dialogue is based on the script or improvised, but fair to say he’s never been funnier. The girlfriend trio is quite humorous. SNL’s Pete Davidson milks laughs as a lecherous officer worker. Hodge may be the new Morris Chestnut. And it is a gift whenever Richard Roundtree appears in a film.

Back to Henson. Given the chance, in a decently thought-out and developed comedy, she ups her game. Her Ali is manic and bossy with her assistant (bordering on distasteful), deceitful with her paramour, insensitive to her gal pals and able to stand up to the brutal, self-entitled co-workers who play her for a wuss. The scattered string of emotions and feelings don’t stump Henson. She towers over all the other cast members with her bravura performance.

Except, the scenes in which she deals with the very enigmatic Sister. Somewhere hidden under a gigantic wig that would even embarrass Diana Ross, lurks the very shrewd and hysterical Erykah Badu, who portrays the psychic who launches Ali’s outer and inner trek to salvation. Smug, ethereal, dizzy and flaky as a pothead, the “Tyrone” singer displays an astute comic nature that equals Henson’s.

Girls Trip is the alpha raunchy female comedy. What Men Want is not as strong. But it grazes that high standard thanks to Taraji P. Henson’s over-the-top performance.

Lincoln Motor Company launches ultimate car clubhouse in Frisco Lincoln Experience Center Opening Is a Homecoming for Dallas ISD Arts Magnet Grad Earl Lucas, a chief designer for the Lincoln Motor Company, performed extensive work on the new Navigator. (Lincoln Motor Company) By David Wilfong (North Dallas Gazette/NNPA Member) The Lincoln Motor Company recently unveiled its new “Lincoln Experience Center” at The Star, Dallas Cowboys’ world headquarters in Frisco. The Lincoln Experience Center is intended to be the ultimate car clubhouse, where visiting patrons can enjoy a premium beverage and peruse the latest offerings from the automaker. The interior of the center is filled out in style. The walls and floors reflect luxury and surround a beverage station formed in an abstract homage to a vehicle hood. Color swatches are displayed like modern art on the walls, and interactive multimedia stations help visitors familiarize themselves with everything Lincoln. Of course, floor models of the latest Lincoln vehicles also reside in the two-level center. When it came time to introducing the latest Navigator, a young man stepped forward and began by proclaiming himself, “the biggest Dallas Cowboys fan in this room.” Earl Lucas, chief exterior designer for the Lincoln Navigator, grew up in Dallas—Oak Cliff to be specific—and the opening of the new center was a special day for him. “Dallas is my home,” Lucas said. “My parent’s only sister and friends still live there; to come home and be a part of the opening of the Lincoln Experience Center is a narrative that I could have never written for myself. Growing up in Oak Cliff, if someone would have told me that I would be designing cars for Lincoln, I would have told them, ‘I don’t believe you.’ I grew up a big-time Dallas Cowboys fan and to see the Lincoln Experience Center as part of that campus, just outside the Cowboys Ring of Honor… warms my heart and makes me feel a sense of accomplishment. God is good.” Lucas is a graduate of Dallas ISD’s Booker T. Washington, a high school that once served as the African American high school in Dallas, but in recent years is known as an “arts magnet.” Graduates have included many famous musicians who are household names, but Lucas was a part of the visual arts program, whose alumni may not be seen as often on TV, but who make their mark in various industries, as well. “My experience at Booker T. Washington was only filled with creative freedom and a place that allowed my interest in art to blossom into the career I have today,” Lucas said. “‘Arts’ [as it was referred to when I at-tended] allowed me to be sur-rounded by teachers and students that enjoyed painting, jewelry making, dreaming of ‘what if’ and, most of all for me, drawing. When I finished and went on to College for Creative Studies [in Detroit, Mich.], my understanding and abilities of artistic fundamentals was more advanced than the incoming students. In essence, ‘Arts’ gave me an advantage and prepared me for success as a car designer by exposing me to different artistic expressions.” Following college, Lucas dove into the auto industry with the Ford Motor Company, which also owns the luxury Lincoln brand. “To work for a premium brand like Lincoln is truly a highlight in my 19-year career at Ford Motor Company,” Lucas said. “After completing a three-year international assignment in the [United Kingdom, living in London], I was requested to return to the United States and assigned to the Lincoln Motor Company. My role as a Chief Designer came by way of working on a number of significant programs for the ‘Blue Oval.’ I am blessed to have designed and worked on many programs and acquired the skill necessary for the role of Chief Designer.” With that role came the opportunity for the one-time arts student to put his mark on one of the premiere SUVs on the road. The Lincoln Navigator is not only packed with creature comforts on the inside, the exterior of the vehicle is the result of meticulous planning, as Lincoln wants it to stand out at first sight. “When it comes to the design, the feature I am particularly proud of is the signature face or front end of the Navigator,” Lucas said. “Lincoln products are all about seduction and human surface language, so creating the Navigator’s face was a big challenge…literally. The scale of the grille and size of headlamps by definition can be imposing and intimidating. However, we were able to create a confident face that speaks Lincoln and gives a sense of protection to the passengers on the inside.” While his career path has followed a wide track from Oak Cliff to London and back, Lucas said that “Big D” is always on his mind, and he makes a point to remind himself of his home turf every single day. “In my office is a huge photo of downtown Dallas,” Lucas said. “I think of Dallas often and consider the lessons learned on her streets integral to my accomplishments. Know this Dallas— no matter my travels, my design assignments and our final products—I am forever linked and take her everywhere. My growth started from that origin and I hope that she is proud of me.”

The Lincoln Experience Center is intended to be the ultimate car clubhouse, where visiting patrons can enjoy a premium beverage and peruse the latest offerings from the automaker. […]