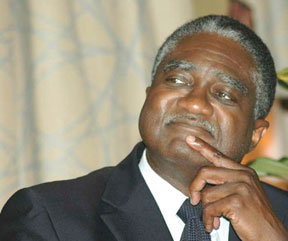 Even on journalist George Curry’s obituary, the New York Times, the Washington Post and many daily newspapers still got the story wrong. While there were facts about his life, there were no comments from professionals at Black newspapers—an industry that Curry dearly loved and fought for all of his life as the “Dean of the Black Press.”

To Curry, the spirit or soul of any story goes beyond who, what, when, and where. In Curry’s world, the biggest part of the story was the why.  In Black America, it was the part of the story he pursued all of his professional life. As a journalist who asked a lot of questions, Curry always asked white America and its segregated newsrooms, ‘why?’

If he could speak from the grave, Curry would let America’s daily newspapers have it about it his obituary. After all, this wasn’t the first time the Black Press has been shut out of a big story that affected Curry. When it happened during his life, Curry gave America’s big-shot editors a tongue lashing in his columns.

He was a journalist whose big credentials and Ivy League ties could have landed him positions at the New York Times or some other prominent American publication. Instead, Curry left Chicago’s biggest newspaper to begin a new life as an advocate of the Black Press and as a civil rights leader. Why? Curry was man who put humanity above profit, purpose over materialism.

In the next several weeks, millions of Black readers around the country will no longer see America’s legendary Black journalist’s insightful and thought-provoking columns that have graced over 200 Black newspapers for decades.

He died on August 20 after suffering a heart attack in Tacoma Park, MD. After years of interviews, deadlines and crusades, Curry is now with his Maker.

Prominent national leaders will be among the thousands who will attend Curry’s funeral on Saturday, August 27 in his hometown, Tuscaloosa, AL. Reverend Al Sharpton is scheduled to give the eulogy at Weeping Mary Baptist Church. A public viewing will be held from noon to 7 p.m. on Friday.

It has been a relative quiet news week in the Black community, as if time has slowed down to allow the Black Press to honor this giant. While Curry is finally at peace, the Black Press has been severely weakened as tough challenges lie ahead for many Black newspapers.

While Curry’s funeral will be a celebration of his life, the ceremony will be another somber reminder of the shrinking pool of great warriors who made the Black Press what it is today. As the surviving pillars of the Black Press age, the strength and future leadership of a historic institution remains in doubt.

Curry’s journalism credentials gave the Black Press a bigger voice in mainstream media and white America. He was an uncompromising watchdog who growled whenever the Black Press was overlooked or ignored in big stories. A maverick who has stared down many of America’s biggest names in journalism, politics and law, only death could silence him.

During his illustrious career, Curry brought many of America’s power elite down to earth with his fierce brand of advocacy journalism. While he had many critics, Curry also had many friends among national Black leaders, including Reverend Jesse Jackson.

After 69 years on earth, Curry is gone.  A civil rights stalwart, his death leaves an enormous void in the Black Press, where as a prominent journalist, Curry advocated for justice and respect for an industry that has told the story of countless Blacks struggling to gain equality in the America’s boardrooms, courtrooms and classrooms.

Most of all, Curry loved the Black Press and championed its cause and needs throughout his life. Until the very end, it was his mission and passion. As time and age weighed him down, Curry still burned as he raised funds to re-launch Emerge Magazine, a publication he once led to national prominence. At the time of his death, Curry had raised $16,000 on the crowd- funding website, GoFundMe.

Some of the America’s most prominent Black newspapers ran stories about Curry’s death, including the Chicago Crusader, which ran Curry’s weekly column on page 5. Every week, readers of the Crusader and other Black newspapers got a unique blend of Curry’s big smile on his headshot and his unabashedly Black views on what’s happening in America in Curry’s weekly column.

In July when the New York Times ran a story about what’s wrong with the Black Press, Curry fired off a column after realizing the article did not contain any comments from anyone who actually worked for Black newspapers. He also argued that the article failed to accurately portray the accomplishments of the Black Press.

After speaking to several Black newspaper publishers, including the Crusader’s Dorothy R. Leavell, Curry was one among very few Black journalists who sought to educate America’s dailies and write about the misconceptions about Black newspapers. Sadly, in Curry’s obituary in the New York Times and Washington Post, comments from Black newspapers were once again not included.

However, Curry’s legacy remains strong among America’s Black leaders, who sent tributes after his death.

Curry was a consummate journalist with integrity as his mantra, said Leavell, publisher of the Crusader newspapers in Chicago and Gary, IN.

“We shall miss this voice of reason and thought-provoking columns full of researched facts. It was just the week of August 13 that George wrote a column titled, ‘Even Funerals Are Not Family Reunions Anymore.’ He used his family as an example of the closeness that he had enjoyed during his childhood and early adult life and bemoaned the fact that at his cousin’s Charlene’s funeral the week before that the closeness was no longer there,” shared Leavell.

Leavell went on to say, “What was ironic is that he pledged that he would try to get his family back together by saying, ‘neither Big Mama nor Aunt Julia Mae would be pleased that our once close-knit family is in shambles, but as long as I have breath in me, I am going to try to get my family back together. I know it’s a very long shot, but I owe that to Big Mama and Aunt Julia Mae to keep trying.’ I’m sure George meant to keep that pledge and perhaps the closeness of his family will become a reality, but at a large cost.”

She added that she hoped his family will reunite at his funeral. “We miss you already, George.”

The news of Curry’s death not only reverberated throughout Black media; the loss was also felt in the halls of government.

“The Congressional Black Caucus joins with members of the press from around the country to mourn the loss of George E. Curry, a pioneer in Civil Rights and journalism,” CBC Chairman G.K. Butterfield (D-N.C.) said in a statement. “Curry was a giant in journalism, and he stood on the frontlines of the Civil Rights era and used his voice to tell our stories when others would not. The CBC offers our sympathies and condolences to his friends and family, his readers from around the country and to the countless number of individuals he mentored in the art of reporting and journalistic writing until his untimely death.”

Democratic presidential nominee Hillary Rodham Clinton even took a moment from her busy campaign to express her thoughts about Curry, whom she called a friend.

“I am saddened by the loss of an outstanding journalist and supportive friend. George E. Curry was a pioneering journalist, a tireless crusader for justice and a true agent of change,” Clinton said in a statement. “With quality reporting, creativity and skillful persuasion, he influenced countless people, including me, to think beyond their narrow experience and expand their understanding. George may be gone, but he will not be forgotten.”

Sharpton called Curry a “trailblazer” and said he was “saddened beyond words” at the news of Curry’s death.

“We pledge to keep the journalistic genius and spirit of George Curry alive in all that we will do in the future to sustain the liberating and empowering voice of Black-owned newspapers and media companies,” stated Dr. Benjamin Chavis, president and CEO of the National Newspapers Publishers Association (NNPA).

“George and I were lifelong friends and co-workers at the NNPA, NAACP, SCLC, ANC, and just about every other national and international organization that is serious about demanding justice and equality.”

Chavis continued, “The legacy of freedom-fighter journalists like George Curry will never pass away, but will always be kept dear and present in our continued struggles to liberate all from injustice.”

Jackson said, “George Curry was a talented, tough, tenacious reporter and editor. Journalism has lost a giant. I have lost a dear friend. George, however, never let friendship or anything else temper or soften his approach to a story. He called it like he saw it every single time. Whether it was international affairs, war and peace, civil rights, gender equality, presidential politics, he had a wide range and a good, objective and scientific mind.”

Born Feb. 23, 1947 in Tuscaloosa, AL, Curry grew up when America’s schools, parks, housing, and communities were segregated. His childhood friend was Dr. Charles Steele, now president of the Southern Christian Leadership Conference (SCLC). Both became involved in the Civil Rights movement—Curry through journalism, Steel through politics.

Curry graduated in 1965 from Druid High School. An active student, he played football and was sports editor of the school newspaper.

In 1966, he moved to New York and worked a year for the Student Nonviolent Coordinating Committee (SNCC). He attended Knoxville College in Tennessee, where he was editor of the college newspaper. He was also quarterback and co-captain of the school’s football team. During the summers, he attended Harvard and Yale on history scholarships. He earned his bachelor’s degree in history from Knoxville College in 1970.

He worked for the St. Louis Post-Dispatch in 1972 and volunteered for the National Association of Black Journalists. In 1977, he founded the St. Louis Minority Journalism Workshop, a training program for high school students. He would later hold similar workshops in Chicago, Washington, D.C. and New York City. As a trustee of the National Press Foundation, he chaired a committee that would fund more than 15 such programs nationally.

Curry worked for the Chicago Tribune as Washington correspondent from 1983 to 1989. He served as the Tribune’s New York bureau chief until 1993.

At Emerge, Curry led a successful four-year campaign to win the release of Kemba Smith, a 22-year-old who was sentenced to over 24 years in prison for a minor role in her boyfriend’s drug ring. In 2000, President Bill Clinton pardoned Smith.

“George Curry was my best editor, mentor and friend,” said Alvin A. Reid in a story in the St. Louis American, an award-winning Black newspaper.  Reid was former senior editor at Emerge who participated in Curry’s minority journalism workshop.