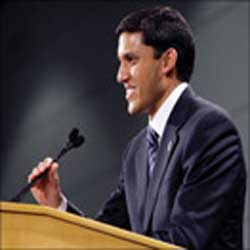 Over thirty years ago, when the fight against HIV first began, the outlook for tackling the pandemic was bleak. Across the world, AIDS was seen as a death sentence. Within just a few years, it had devastated communities from the United States to South Africa.

But the world continued to fight, and the past three decades have seen tremendous progress in HIV research, prevention and treatment, thanks in large part to the leadership of the United States. Today, we can build on that strong legacy to answer President Obama and Secretary Clinton’s call for an AIDS-free generation.

The XIX International AIDS Conference (AIDS 2012) conference will be an opportunity to renew our commitment to this incredible goal. It also marks an historic moment, as the United States hosts the conference for the first time in over 20 years now that people living with HIV and AIDS are able to visit the U.S. to attend inperson.

We know that we have a long way to go to win the fight against HIV–especially for children.

Through the President’s Emergency Plan for AIDS Relief (PEPFAR)–the largest international commitment to a single disease by any individual country–the U.S. Agency for International Development (USAID) and other U.S. government agencies provide lifesaving HIV and AIDS services to millions of children, women, and families worldwide.

These investments in the global AIDS fight are paying off. Together with PEPFAR, our efforts have made a significant difference in promoting access to prevention of mother-to-child transmission (PMTCT) services, helping to cut new pediatric infections in half in the past decade. We’ve also helped support 9.8 million pregnant women with HIV testing and counseling and provided PMTCT services to more than 660,000 HIV-positive women. As a result, approximately 200,000 infants were born free of HIV.

That means that 200,000 more children have had the opportunity to live to celebrate their fifth birthday.

This milestone is an extra-ordinarily important one in the development of all children, and it is the impetus behind the Every Child Deserves a 5th Birthday campaign–an awareness raising effort that brings together dozens of partners and educates a broader community on how to save children’s lives. The campaign also sets the stage for the Child Survival Call to Action in June.

Co-convened by the Governments of the United States, India and Ethiopia, and in close collaboration with UNICEF, the Call to Action will bring together public and private constituencies to chart the course towards the end of preventable child deaths–including deaths caused by AIDS or AIDS-related causes.

The Call to Action will also build on ongoing global efforts, including PEPFAR and UNAIDS’s global plan (PDF 785KB) to end virtually all new HIV infections in children in the next few years while keeping mothers alive and healthy.

Still, we need to do better in the fight against HIV and AIDS.

Today, we know what works in the effort to save children’s lives and now, more than ever, we are in a position to virtually eliminate pediatric AIDS.

Together, we can give all children the chance to celebrate their fifth birthday.

HCV infection—boosted the risk of death 50 percent in a US group of people with AIDS.
[…]

Sickle cell disease affects 20 million people worldwide, including at least 100,000 in the United States, mainly African Americans, but Hispanics and Asian-Americans, too. To help address the problem on a global scale, the NHLBI has been supporting programs in sub-Saharan Africa, where more than 75 percent of the sickle cell disease births worldwide occur. SPARCo, with a hub in Tanzania, and additional sites in Nigeria and Ghana, works to develop an infrastructure for sickle cell disease research, health care, education, and training to take place in Africa. […]

The Balm In Gilead is appealing to ALL congregations of every faith and background to host an HIV Testing Event at some point during the month of June, in support of National HIV Testing Day […]